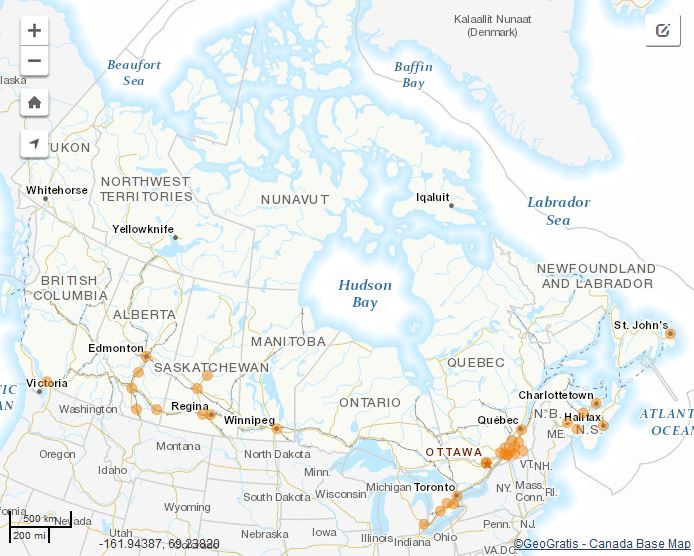 In 2013, 24,049 refugees made Canada their home through government assistance (GARs), private sponsorship (PSRs) and asylum-seeking [1]. A refugee is someone who been forced to flee their home country due to circumstances such as persecution, war or violence [2]. Worldwide, 60 million people have been displaced from their homes, and over half are children. In 2014, 53% of refugees worldwide came from just three countries: Somalia, Afghanistan, and Syria [3].

Since the outbreak of civil war in Syria began in 2011, millions have been displaced from their homes. Presently, 4.3 million Syrians are refugees, and 6.6 million more are displaced within Syria. Most of these refugees remain in Middle Eastern countries such as Turkey, Lebanon, Jordan and Iraq [4]. The Syrian Refugee Crisis prompted the Liberal government to make a pledge: to welcome 25,000 Syrian refugees as permanent Canadian residents before the end of December 2015. This deadline has since been pushed to February 29, 2016. Canada is partnering with the United Nations Refugee Agency to identify Syrian refugees in Jordan and Lebanon who are interested in coming to Canada. Security and health screening processes include an interview with visa officers, identity and document verification (both before and upon arrival), and health screening [5].

A total of 6,300 Syrian refugees have arrived in Canada since November 4, 2015, and another 5,307 refugee applications have been finalized. These figures are based on data from January 3, 2016. 85 communities across Canada (not including Quebec – their refugee program is run in-province) are currently preparing to welcome privately-sponsored Syrian refugees [6].

Once refugees arrive, they will be provided with immediate, essential services and long-term settlement support to ease their transition and integration into Canadian society. Support for GARs is provided by the Government of Canada, covering items such as clothing, food, temporary shelter and basic household needs. Social supports include assistance with finding permanent housing, employment and community orientation. Support seeks to align with provincial and territorial social assistance rates. Refugees resettling in Quebec receive similar support, but this is provided by the province. PSRs are provided with care, lodging, settlement assistance and social support by sponsors, who normally commit to 12 months of support, or until the refugee becomes self-sufficient (whichever comes first) [5].

Here in Nova Scotia, community donations have also been welcomed. On the first day of the Bayers Lake drop-off centre in Halifax, 1,500 bags of clothing, 200 pieces of furniture, 40 baby strollers and many children’s toys, toiletries and linens were donated. The centre is located at the former Rona location in the Bayers Lake Business Park, if you are in the Halifax area and interested in making an item donation such as winter outerwear, new toiletries, baby supplies, toys, school supplies and gift cards for groceries [7]. Many communities, both large and small, have begun refugee sponsorship and support groups. The Immigrant Services Association of Nova Scotia (ISANS) estimates that 500-700 Syrian refugees could be arriving in Nova Scotia in the coming months, though no concrete figures have been provided [8]. The ISANS website has a compilation of wonderfully laid out information about welcoming Syrian refugees in Nova Scotia, and what you can do to help, if you have further interest [9].

Many false claims have caused some in Canada (and in other countries) to be wary of accepting Syrian refugees. Thankfully, people worldwide have taken to the internet to debunk some of the myths around refugees, notably in the United States [10], the UK [11] and in Canada [12].  Additionally, ISANS has compiled a list of debunked myths for Nova Scotians [13] . We hope that you will take the time to read them if you are feeling skeptical, and to recognize that soon enough, at least 25,000 Syrian refugees, as well as other refugees worldwide, will be permanent residents of Canada. We should be treating them as such, by welcoming them into our diverse, nurturing, prosperous and peaceful country, with arms open wide.

The Canadian Council for Refugees applauds the warmth and hospitality provided by countless Canadians; however, they identify several key challenges that must be tackled in 2016 to ensure Canada’s refugee response is effective. Firstly, continuing support to Syrian refugees, while expanding immediate concern to refugees from all regions. This includes shortening processing times for resettled refugees from all countries, which has been shown to be possible through the recent effort with Syrian refugees. The Council also encourages Canadians to not stop their efforts at 25,000, specifically encouraging the government to support 25,000 refugees, with PSRs going over and above this number. Finally, equitable treatment for refugees, such as full coverage under the Interim Federal Health Program, is recommended [14].