Final day in Dar-es-Salaam and what a day! Terrilyn and I went on a bicycle ride through Swahilitown (one of the poorest neighbourhoods in Dar). Our university-educated tour guide, Meja, started a company, Afri-Roots,  to promote the use of bicycles in Dar. He also offers 3-hour tours for wazungo (foreigners) for $40 to see what life is like for most Tanzanians living in Dar.

We first visited a market with hundreds of shoes on display sorted by type but not by size; one needs a lot of time to find a pair that both fits and looks nice. There were also many shops selling second hand clothes that had been beautifully washed and restored. We then went to a local coffee vendor. The vendor obtains raw beans from the Arusha-Mosha area, roasts them in a simple pot over a charcoal fire, pounds them with a pestle in a large wooden mortar and then makes the coffee Turkish style. We had that accompanied by a delicious amalgam of wheat, sugar and nuts, a home-made peanut brittle refreshingly less sweet than the commercial type. We continued to ride our bikes through back alleys and visited a traditional healer. She grew her herbs in a nearby garden and if she didn’t have the right herb, she’d write a prescription and send you to a traditional pharmacist!

The tour continued with a short visit to a home built in the traditional style of six large rooms (one for each wife and their respective children). The houses are made with coral walls and roofs of mango struts. Mango trees are no longer allowed to be used for building. We learned that people didn’t own their own houses; they had 99-year leases, which the government could revoke at will, and did, when they wanted to build something. This created insecurity in people’s minds and some difficult dislocations.

This neighbourhood raised money locally to build a bridge when the various levels of government were unable to provide the necessary funds.  We stopped for home-made chips in pilipili (chili) sauce in the local version of a fast food takeout. This consisted of five ladies chatting around a pot of boiling oil while one cut potatoes and put them in the pot.

Next stop was a local cinema with wooden benches, a 30” old-fashioned TV and a DVD player. They showed pirated Hollywood or Bollywood movies that were overdubbed by a Tanzanian who told the story while the scenes unfolded. This wasn’t true dubbing as, according to Meja, he didn’t speak Hindi and perhaps not even very good English.  Nevertheless, he was an excellent story teller and his overdubs were now distributed even to other East African companies.  People paid 200 shillings at these theatres rather than the 10,000 shillings one would pay in a regular theatre ($1 Can = 1500 shillings). We later passed a theatre with a satellite dish that was showing live football games.  These live shows cost 500 shillings and you can hear the cheering throughout the neighborhood!

We continued our bike journey through another market area where clothes were 1/3 to 1/4 as costly as the first market. Clothes were in large unsorted unwashed piles. The vendors from the other market bought many of their clothes here that they then cleaned, repaired and sold at 3-4x the price.

Returning to the hotel after an afternoon of cycling and learning about urban life in Dar es Salaam, we were greeted by Bob and Michele Bortolussi who had arrived from Uganda.  Cycling in Halifax will be hard to resist after this experience.

Has anyone else taken this bike ride in Dar?  Or had a similar experience that they would like to share with us about their cycling and learning about the local communities?

As our team wraps up their two week session in Tanzania we offer the 3rd post in this series – photos as soon as everyone is back in Halifax.

With a packed vehicle, 6 Canadians and Majuto (our fabulous driver), we began our 8 hour journey to Ifakara which took us out of the traffic jams of Dar es Salaam, through many villages as we zoomed along a national park with elephants, zebras and giraffes lining the road, then to a dusty and bumpy road; with the Tanzanian Training Centre for International Health (TTCIH) at the end of the road!  To see Dr Pemba and Joyce greeting us at the end of a long journey made us feel at home.

The training program started on Monday with 40 participants from Ifakara and Mwanza.  The participants from Mwanza are taking their Masters in Public Health at the Catholic University of Health & Allied Sciences.  Students started by learning how to identify a research question, refine it and then explored what methodologies they could consider for their projects.  The participants were divided into 6 groups; two from Mwanza and four from Ifakara. Each group had 5 to 7 participants that included a range of professional disciplines and many  members had not met or worked with each other. The collaboration started with discussion of the research questions put forward by each member of the group. The research questions were based on their own experience and guided by the lecture: “How to develop a research question”. The group then vigorously discussed the merits of each question and selected one to work on as their team project. A spokesperson for each group presented the list of topics to the entire class and noted the one selected by the group and the rationale for its selection.

Some questions that the groups explored:

During the second week we focused on writing reports, developing a budget, preparing an abstract and finalizing presentations which happened on Friday.  Students debated, discussed, refined and finalized their questions and methodology

Presentations in front of judges to determine the top two groups as well as graduation happened on Friday.

While Shawna doesn’t have lots of time to send emails we are thankful for this note on our long standing partnership and wanted to share it with you!

There are many objectives to this trip to Tanzania starting with renewal of partnerships and establishing next steps with some of our long term partners.  Upon arrival in Dar es salaam, I met with PASADA which is an HIV/AIDS clinic.  In future posts we will provide you with links to more information on PASADA (as it’s available).

The meeting with Simon Yohana (Executive Director), Dr Daniel Mazesa (Medical Director) and Leonard Mwakasege (Human Resources Manager) resulted in a renewal of our student summer program as well as an expansion for resident opportunities and the development of a certificate in HIV/AIDS.  After 8 years of working with PASADA, Dalhousie’s partnership will expand to support their new priority areas in research as well as medical education.  We will keep you posted on the growth of this partnership over the next few months.

If you are interested in getting involved in the work and partnership with PASADA, please contact me at shawna.ohearn@dal.ca

While Shawna and our colleagues are in Tanzania we will be posting a series of “Blog posts from the road”.  This first one presents Shawna’s initial thoughts upon returning to Tanzania.  Photos will be added as soon as we are able to transfer them.  Enjoy!  more updates to come later this week.

With all great intentions, I had planned to blog each day upon arrival in Tanzania.  While a daily journal was put together, the internet has reminded me that there are not always the same amenities when we travel outside our urban contained world.

I have to start with two personal reflections (actually observations) that have been growing over the last week.  First, while everyone has a mobile phone in Tanzania (actually many people have more than one phone as they have multiple network providers so people will have a phone for each provider) the difference between Canadian mobile users and Tanzanian mobile users is……Tanzanians aren’t on them 24-7!  They walk on the streets with their heads up and look at life, people and where they are walking.  You don’t see anyone with their head and fingers buried on an iPhone or Blackberry.  A lesson that we need to remember in Canada.

My second reflection relates to my personal life and my December marathon goal.  I am in the key weeks of training for a marathon and was worried about being able to run during my time in Tanzania.  My worries were not necessary.  I have met people of all ages and level of running abilities as I ran in the rain and pollution of the city (Dar) and the dust and uneven roads in Ifakara.  There are people who will cycle with me as they return home from their fields, others who will run for a few miles to keep me company and some of my team members joined me on their bikes for my 20 mile run on Saturday morning.  I have always loved to run and the last year of injuries has been challenging to be out of my training routine.  I must thank the running groups in Dar, the people of Ifakara and my colleagues for their support and encouragement over the last few weeks.  You will be with me as I cross the finish line in Sacramento in December! Asanti Sana! 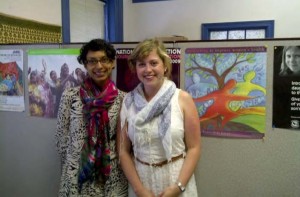 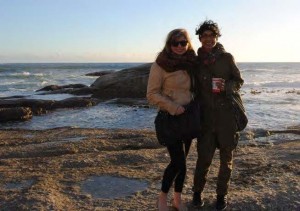