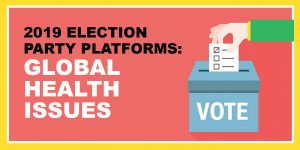 This week we would like to highlight Dal News and Obinna Esomchukwu for a fabulous review of our Global Health Panel Discussion from Sept. 25; we couldn’t have said it better ourselves.

Click here for the Dal News story, photos by Nick Pearce (text below)

“Diseases have no boundaries”: Envisioning next steps in global health 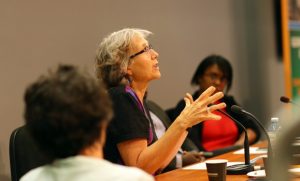 Dr. Heather Scott, an associate professor in the Department of Obstetrics and Gynaecology, gestures during a panel discussion on Global Health Day at Dal.

Health researchers from Dal and beyond gathered in late September to mark Global Health Day, sharing their work on various public health initiatives and discussing the impact of those on health outcomes around the world.

The event was anchored by a panel discussion drawing lessons from Nova Scotia and West Africa on a range of issues, including shifts in global mentorship, the impacts of urbanization, and the ethics of health interventions.

Panelist Dr. Buba Manjang, deputy director of public health in The Gambia and postdoctoral fellow at the University of Waterloo, put global health issues into stark relief by describing the disparity in health outcomes between lower- and middle-income countries (LMIC) and high-income countries (HIC).

“As we all know, diseases have no boundaries, so we need to work closely together,” he said. “That is the importance of global health.” 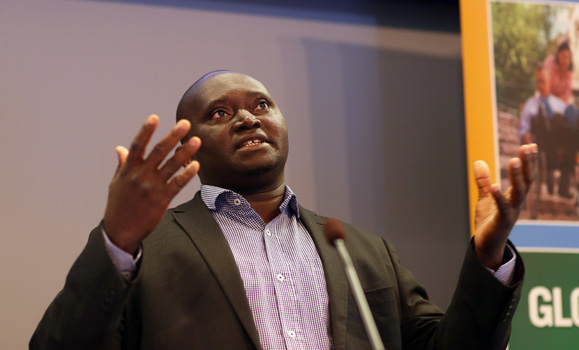 He noted that while global life expectancy has increased, “a wide gap still exists between high-income and low- and middle-income countries” and “approximately 98 per cent of all child deaths occur in LMIC.”

To show the promise of global health efforts in tackling the problem, Dr. Manjang highlighted one of his own projects — done in collaboration with researchers at the University of Birmingham — that involved the development of a program to promote hygienic weaning and food-handling practices in 15 rural communities in The Gambia.

“Our aim for the clustered randomized trial was to investigate the effectiveness of weaning behavioural change intervention for mothers’ practices and also reduce biological contamination of weaning food and improve health outcomes,” he said.

The effect of the program was tremendous, he said. The number of diarrhea incidence in the communities that participated in the study was significantly lower than in other communities that did not receive the intervention.

Dr. Watson-Creed, a public health physician and assistant dean with the Dalhousie Medical School, focused her remarks on the implications of urbanization on global health. 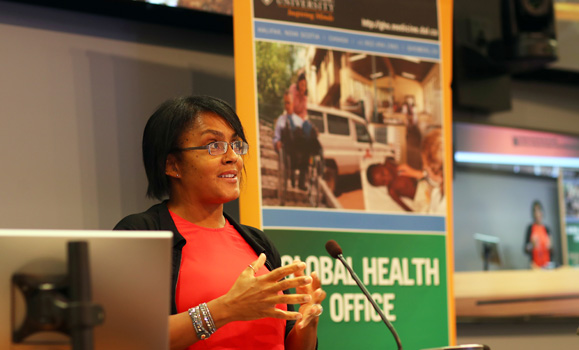 She described urbanization as a “force that has been driving human behaviour for thousands of years.” However, she stated that the exponential increase in urbanization around the world is a cause for deliberate reflection and informed public health action. “Urbanization,” she said, “is currently happening at a pace that makes me worried about the sustainability of rural populations.”

She identified several effects of urbanization on human well-being, including loneliness, loss of connection with nature, and unintended environmental changes.

“As we design cities for economic productivity,” she said, “we can almost focus on that to the exclusion of the other things that support health.”

Summarizing the research findings of Dr. Colin Ellard, a psychologist at the University of Waterloo whose research is focused on the impact of architectural designs in urban areas on human psychology and well-being, Dr. Watson-Creed stated that “human beings are directly and immediately impacted by being in poorly designed neighbourhoods.”

A shift in mentorship

Dr. Scott, a clinician and the global health director in the Department of Obstetrics and Gynecology, used her work in Ghana, Rwanda, Tanzania, and Canada as a context to discuss mentorship in global health.

She described the difference between the old approach and the current approach to global health mentorship.

“Over time, there has been a gradual shift to place more emphasis on clinical teaching rather than the provision of a service,” she said. This has led to the application and refinement of the “train-the-trainer model,” which she described as a more sustainable approach to global mentorship.

She emphasized the importance of a collaborative approach to global mentorship. “That means working hand-in-hand with clinicians and educators so that you can help them meet the needs of their clinic, health center, or hospital,” she said. 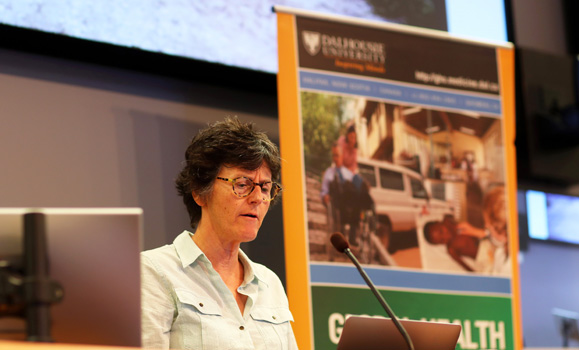 The final speaker Dr. Graham, a medical anthropologist, delivered an energetic and lyrical presentation titled, “Troubling Interventions.” She examined the consequences of unethical interventions and research practices in Canada and abroad.

“Research is not perfect,” she said, “and making sure that all clinical trials and post-market data on safety and effectiveness are sufficiently monitored is an international burden we need to consider global.”

Her presentation was a call for a genuine reflection on the ethics of local and global interventions.

Prior to the panel, attendees also had a chance to learn about some of the cutting-edge research happening across Dalhousie through a poster presentations on a range of global health issues. 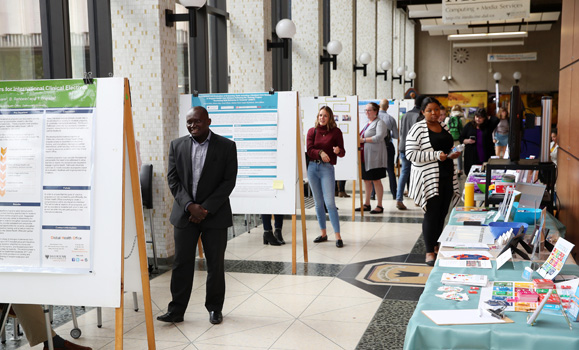 Displays in the Tupper LInk 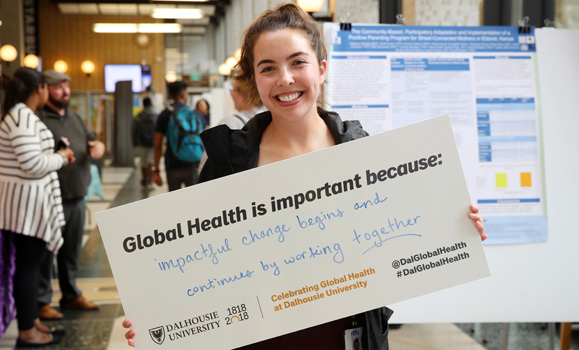 Rachel Ollivier shares her thoughts on why global health is important