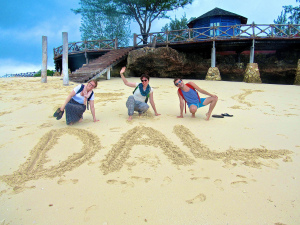 This summer the global health office is supporting three Dalhousie University students completing research and internships in Tanzania. They are embracing this cultural and clinical experience with such enthusiasm and blogging about it as often as they can; so much so that we wanted to share some of their stories with you.  The students’ visit coincides with Ramadan, a holy month observed by Muslims worldwide that requires fasting from sunrise to sunset, and these bright students considered what this might mean before they arrived.

Before coming to Dar, I was apprehensive about Ramadan (the holy Islamic month in which Muslims fast from sunrise to sunset). I wasn’t sure if there would be restaurants open, would it be offensive to walk around with a water bottle? These were some serious concerns. However, despite the large Muslim population, Dar is fairly relaxed…..My favourite experience living in a largely Muslim city is the haunting call to prayer resounding above the sound of horns honking and crowds milling about the street. While I don’t understand the words, it still offers a feeling calm, and a sense of being transported from the hectic chaos that can be daily life.

To complement their research and placements the students are taking language classes.  This has been important for the students to learn some conversational Swahili which has offered them more meaningful interactions with friends and colleagues and has deepened their appreciation for the culture that surrounds them.  They are also enjoying the tastes of the local menus – sounds like they could write their own guide book on the best butter chicken in the neighbourhood.

It’s nice to see that they have also found some time to visit the National Museum and discovered items that are not only historically interesting but also related to their visit.

A little more on point with our purpose for being in Tanzania was the exhibit on the HIV epidemic. Which included some interesting cartoons from the 1980’s (the height of the AIDs crisis and before the availability of antiretroviral medications, when the diagnosis of HIV was the equivalent to a death sentence).

We are so proud of these students! They are doing amazing work and are wonderful ambassadors for Dalhousie. Their blog posts are short and sweet, because let’s face it – they are busy and we are glad they are spending so much time out exploring their surroundings. The benefit is that they give us a snapshot into this amazing experience and they allow these students to feel connected to someone or something bigger. If you would like to read some of these stories yourself please follow the blog link. 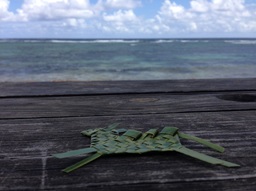 Donkey woven out of palm leaves

Reflecting on my academic, cultural and personal experience while completing a placement on Grand Cayman brings me to think of a series of memories and events surrounding the national tree, the Silver Thatch Palm (Coccothrinax proctorii).

As a student abroad, I spent most of my time trying to understand and immerse myself in Cayman culture but on Palm Sunday; I was able to share some of my culture with two local friends. Following the service at Cayman Islands Baptist Church, I was able to share Coptic (Egyptian) Orthodox traditions for the same holiday as I taught two of my friends how to weave a donkey out of palm leaves. This was a cultural tradition I adopted years prior, and one that made me feel at home while away from home. For my friends, weaving came naturally as it was a part of their national heritage.

Weaving is a common occupation in Cayman and Egyptian culture. In Cayman culture, it is a way to celebrate identity and historical and cultural roots. The Silver Thatch is endemic to Cayman Islands and captures its natural heritage. In as early as the 1700’s it was used to produce items such as hats, baskets, and rope, as the leaves are tough, and resistant to the effects of salt water. In Egypt, palms are also used to produce similar items, but in the Coptic culture, making donkeys on Palm Sunday was a way to commemorate Christ’s entry into Jerusalem.

Reflecting on this memory, I see how it captured occupation and validated its value and representation of a person’s identity. For me, weaving facilitated communication, formulation of community bonds, and knowledge exchange. In these small moments, I was able to witness the just how much of an occupation tells you about a person and allows for relationships to bond.

As a health care professional, it captured a journey towards cultural sensitivity and awareness and showed how easily occupation can build on relationships. Although the people that I bonded with were not clients, it showed me how occupation can be used to implement a greater understanding of the people you work with day to day. It demonstrated a beautiful and natural way of building relationships and how important it is to understand the value of the “little” things that people do day to day and just how much it tells you about a person, about yourself, and to value what you both have to offer one another. And from that, it gave me a new perspective to share with future students hoping to complete a placement abroad.