The first Global Health Rounds of 2016 took place on January 20th in the Sir Charles Tupper Medical Building. Global Health Rounds is a free public lecture series, focused on highlighting and discussing the global health activities at Dalhousie, as well as contemporary global health challenges, with leaders in the field. These sessions are offered monthly and anyone is welcome (and encouraged) to attend. Speaker and location details will be posted on the Global Health Office Website, Facebook, Twitter and Instagram.

January’s Rounds, led by Dr. Ingrid Waldron, was entitled “Race, Place & Waste: Exploring the Health Effects of Environmental Racism in African Nova Scotian & Mi’kmaw Communities.” Dr. Waldron discussed the Environmental Noxiousness, Racial Inequities and Community Health – or ENRICH – Project, which aims to better understand the effects of environmental racism in African Nova Scotian and Mi’kmaw communities, and to support their struggles against it. Dr. Waldron’s talk drew a crowd of more than forty students, faculty, health professionals and community members. We hope to see just as much enthusiasm for February Global Health Rounds: Health & Wellness of African Nova Scotians. Check out (and share) the Facebook event for more information, and to indicate your interest and plans to attend. 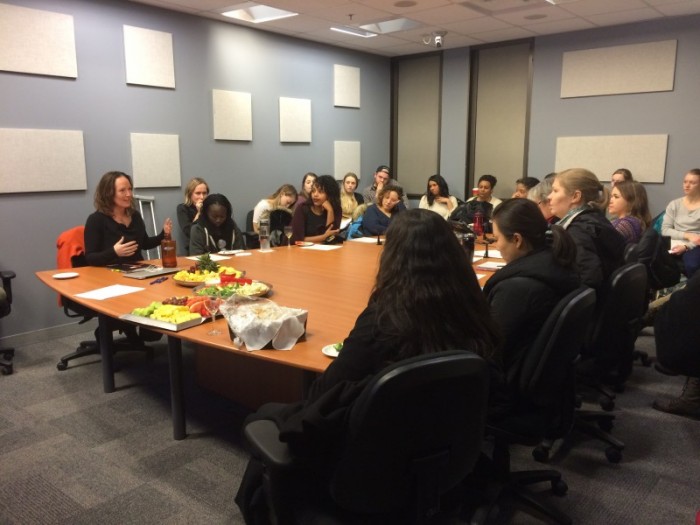 Some of the January Global Health Rounds attendees. We had to open a second room connected by video-conference because there were so many people!

What is Environmental Racism?

The first time I heard about environmental racism was in a 2013 article by Vice News about The Chemical Valley [1]. The Aamjiwnaang First Nations reserve near Sarnia, Ontario, home to about 850 Chippewa, sits surrounded by harmful chemical plants that produce gasoline and synthetic rubbers, among other materials. Why are these plants located next to a First Nations reserve, rather than in the midst of a middle class, primarily white neighbourhood? How do race and class shape where hazardous industries are located?

Dr. Waldron’s research in environmental racism seeks to answer these types of questions in Nova Scotia, while assessing the health impacts and working toward policy solutions. In Nova Scotia (and globally), there is a disparate location of hazardous industrial polluters in communities of colour, First Nations, in remote areas and among the working poor. The ENRICH project began with community consultations in the spring of 2012. Consultations took place in Yarmouth-Acadia First Nations, Eskasoni First Nation, Membertou First Nation, Lincolnville, and other affected communities. The concerns that were identified among these communities include (but are not limited to) fear of water and soil contamination, high rates of cancer, asthma and fetal anomalies and social nuisances such as loud noises, increased insects and mammals. Some women feel that their reproductive choices are limited, not wanting to expose a child to the aforementioned effects of environmental racism.

Dr. Waldron noted that environmental racism is an intersectional issue. Low income white communities also experience environmental racism, but their issues are often addressed more quickly. When there are multiple factors impacting the lack of power to be protected and heard (race, place and class) due to a history of forced displacement, social marginalization and destruction of culture and language, environmental racism worsens. Despite pushback from these communities who are affected by landfills and dangerous industries, there is a common response: in order to have grounds to remove them, there must be concrete, scientific proof that they are causing harm. The burden of this proof often falls on the communities, but it should be shifted to those responsible for environmental racism.

Communities experiencing the health and social impacts of environmental racism shouldn’t have to wait for 100% proof and validity to have their issues addressed. Dr. Waldron’s work, in collaboration with MLA Lenore Zann, culminated in presenting Bill 111, An Act to Address Environmental Racism, in the Nova Scotia Legislature.

In 2015, Bill 111 made it to second reading, but did not pass. Dr. Waldron is not discouraged, as the bill has introduced to the issue of environmental racism to many who were otherwise unaware. Bill 111 was featured in The Huffington Post, The Chronicle Herald, and is now on the record as being debated in the Nova Scotia Legislature [2]. She plans on introducing the bill again in the near future.

Dr. Waldron’s current work includes working with a dedicated team to develop an all-applicable Environmental Bill of Rights, stating that everyone has the right to clean air and clean water; the right to live, work, learn and play in healthy and sustainable places, among other standard rights that those impacted by environmental racism are not always afforded.

The Global Health Office would like to thank Dr. Waldron for her eye-opening talk about environmental racism, a pressing local and global health issue. To learn more about the ENRICH Project, you can visit their website [3].