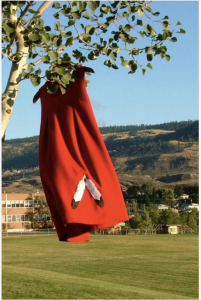 Today we honour missing and murdered Indigenous women and girls (MMIWG), including Trans and Two-spirit individuals, across national levels. Since 2017, May 5th has been considered the National Day of Awareness for MMIWG. This day is also considered Red Dress Day, which was created in response to the REDress Project by Jaime Black. This project was a public art installation that was created in response to the MMIWG epidemic in both Canada and the United States by hanging empty red dresses in a range of different environments. Each one of these dresses symbolizes an Indigenous woman or girl that has been murdered or is missing, although this represents only a small portion of the thousands of sisters. The red dresses and the power behind them are hoped to inspire reconciliation and safety for Indigenous women and girls. While there are many symbols associated with the colour red, one of the most important concepts is the fact that many Indigenous people believe that red is the only colour that spirits can see. Therefore, we use red to call back to the spirits of these Indigenous women and girls to allow them a chance to be among us and also have their voices heard through their family members and community. Additionally, red relates to our lifeblood and the connection between all of us which symbolizes both violence and vitality.

In 2021, you can find a full week of national events, both in Canada and around the world, that honor MMIWG and as well as calls to action for the government to address this extremely horrifying epidemic that has only worsened since the COVID-19 pandemic and the resulting public health measures have begun. On this sacred and symbolic day, we honour our lost sisters by wearing red. In addition, it’s important that we’re educating ourselves on both the meaning of the day and also what’s happening around us. There are many ways to do so. Below is a list of resources and events including webinars and virtual events that you can get involved in throughout the week.

There are many different ways to learn more and educate yourself on MMIWG. Below are some especially interesting books written by Indigenous authors to help enlighten you on the topic: