By: Rachel Ollivier, PhD Candidate in the School of Nursing

The Dr. Ronald Stewart Award for Student Leadership in Global Health was established in 2006 and is presented, annually, to a student of Dalhousie Medical School or in the faculties of Health or Dentistry, who has demonstrated leadership in global health and a commitment to improving the health of marginalized communities during their time at Dalhousie. This award honours Dr. Stewart’s personal, professional and educational support and dedication to global health, and the advancement of social capital worldwide. Dr. Stewart, a former provincial Minister of Health and Order of Canada recipient, has been enriching students’ experiences at Dalhousie Medical School for many years as a popular and accomplished educator, past director of the Medical Humanities program and a key champion for global health education.

This year’s recipient, Ms. Rachel Ollivier, is a PhD Candidate in the School of Nursing and a Registered Nurse on the Adult Surgery Unit (Women’s Health) and in the COVID-19 Primary Assessment Clinic at the IWK Health Centre. She has worked in various nursing capacities across Canada, as well as in Zambia (2016) and Tanzania (2018). Her doctoral research aims to explore postpartum sexual health in Nova Scotia using a feminist poststructural lens.

Rachel’s passion for global health became apparent early on in her undergraduate degree, which she completed at UBC Okanagan in Kelowna, B.C. from 2012-2016. With regards to research in global health, Rachel has contributed to national and institutional care policies, as well as situational analyses, in Zambia and Jamaica through her role as a Research Assistant for the WHO/PAHO Collaborating Centre for Health Workforce Planning & Research and UBC’s Aging & Health Lab. 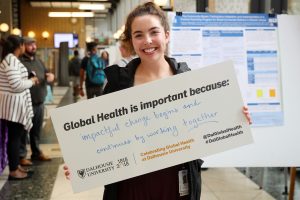 While at Dalhousie, Rachel has been involved with several global health initiatives. In 2018, Rachel spent 3 months living in Dar es Salaam, Tanzania as part of her placement at the Muhimbili University of Health & Allied Sciences (MUHAS) as a Queen Elizabeth Scholar. Through this opportunity, she worked to strengthen the existing partnerships between Tanzanian and Canadian nurse scholars and collaborated with the MUHAS team on maternal health research projects. She also lectured in the Master of Science in Nursing (Midwifery) and Master of Science in Nursing (Critical Care & Trauma) programs and regularly participated in clinical rounds with graduate students on the maternal, paediatric, and neonatal intensive care units at Muhimbili National Hospital. In Spring 2019, she competed in the international final of the World’s Challenge Challenge, an interdisciplinary competition aimed at addressing the United Nations Sustainable Development Goals, alongside teammates Justine Dol and Brianna Richardson. There, they presented their innovation titled “Essential Coaching for Every Mother”. The innovation, led by Justine Dol, aims to address the severe lack of services and support for new and expecting mothers in Canada and Tanzania through a daily text message platform that provides support and information.

Rachel acts as a member of numerous councils, student groups, and committees at both Dalhousie and the IWK. Her dedication to women’s health, nursing, and global health leadership has been recognized in receiving awards such as the CAPWHN Emerging Leader Award, Rising Star Awards from both NSCN and CARNA, and in being featured as a ‘Nurse to Know’ by Canadian Nurse magazine. In October 2020, she was named an Emerging Leader on the 2020 Canadian Women in Global Health List.