Thank you to the Dalhousie Global Health Office and the Johnson Scholarship Foundation Bursary for helping me offset costs to attend the International Council of Nurses (ICN) Congress in Singapore from June 27-July 1, 2019. I also had the privilege to attend the Student Assembly on June 26th with over 300 other nursing students across the globe. The Student Assembly and the Congress was a great opportunity to network internationally with other nursing students and professionals. The Student Assembly allowed for students to have their voices heard as to how ICN can involve students across the world and become more involved with ICN in general. The students were able to pitch ideas to help engage with us more. 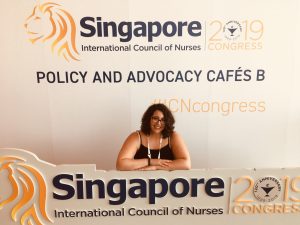 I had the privilege to be able to speak to and listen to influential people in healthcare. Global experts, such as the Director General of the World Health Organization, the President of Singapore, the President of ICN and many more, gave talks on different subjects. A major theme that came out of the conference was climate change and how it is impacting healthcare and the health of people across the world. Another major theme was the dire need we are in for more nurses and healthcare professionals in general. We need over 18,000 more healthcare professionals by the year 2030 due to the aging populations across the world and climate change. Another thing I noticed while speaking with and listening to the different speakers at the conference is that nursing varies in different countries, such as professional bodies, regulatory bodies, unions, scope of practice but the goal is always the same, to help people, and the issues are very similar such as working short and limited resources.

Overall, this was an amazing opportunity! To all the nurses and future nursing students out there, ICN 2023 will be held by CNA in Montreal!

Learn more about the International Council of Nurses