As a second-year medical student with an interest in psychiatry, working with the SSNS through the Dalhousie Medicine Service Leaning Program has provided a unique opportunity to learn about mental health resources outside of the hospital. After seeing patients discharged from an inpatient setting to re-integrate into the community, I have found myself wondering “what happens next?”

To answer this question and gain a first-hand perspective on the work the SSNS does, I interviewed Ian Burton. Ian took the time to sit down with me and tell his story, including the role that the SSNS has played in his recovery journey. Sitting across from Ian now, one would not think that this is a man who has lived through difficult times in which he did not know where he would be able to find shelter for the night. His happy demeanour, friendly smile, and positive attitude towards life serve as a testament to his resilience.

Ian’s journey began in the early 2000s when he was first hospitalized for psychosis. After a number of hospitalizations, Ian found himself living on the streets of Halifax. Eventually, he spent a year at Simpson Landing transitional living facility in Dartmouth before being discharged to live independently in the community.

Early on in the course of his illness, Ian’s family encouraged him to utilize the SSNS services in his hometown of Wolfville. Ian was reluctant to do so at the time, which he attributes to his young age and frustration with the healthcare system. Little did he know at the time that the SSNS’s Supportive Housing Program would be the means by which he would transition to independent living. The Supportive Housing Program offers support to people with lived experience in recovery. Ian lives with roommates who are also in recovery, which allows residents to support one another through weekly house meetings, training opportunities, and access to other SSNS programs. For example, the SSNS hosts a weekly peer led education and support group, a family education support group, and one to one peer support to assist individuals upon discharge from the hospital.

Over the past five years in the supportive housing program, Ian has spent his time volunteering, obtaining employment, and working with his healthcare team to optimize his medication regimen. When he is not at work, Ian spends his time playing guitar, watching Netflix, and participating in outings organized through the SSNS.

Looking into the future, Ian’s primary goal is to live independently and graduate from the Supportive Housing Program. He said he would not have been able to reach this point in his recovery without the help of the SSNS: “After my last hospitalization in 2014, there was a long journey back to living independently, SSNS and Caldy Grange were there to assist as a stepping stone towards developing an independence that lasts. It was the perfect balance of help and support to stay on the right track and have a great relationship with roommates, and I am happy to say I am in the process of getting my own place!”

Unfortunately, obtaining funding as a non-for-profit organization is challenging. This challenge is augmented by the societal stigma surrounding mental illness, in addition to the lack of services available in rural regions throughout the province. The SSNS has a network of education and support groups for those affected by schizophrenia, psychosis, bipolar and related mental health disorders. These groups are led by dedicated volunteers, and the Schizophrenia Society hopes to make their services more readily available in other regions.

The SSNS has yearly fundraising initiatives, such as the annual Road to Recovery Walk, which directly supports their programs and services. Their annual “Living and Learning” conference hosts inspiring speakers working in the field and engages mental healthcare clinicians, community organizations, and people with lived experience. Through these fundraising and education initiatives, the SSNS is able to support more people like Ian in their progression to independent living and integration within the community. Moreover, serving as a testament that with the support of services like the SSNS, the community, and healthcare professionals, recovery is possible. 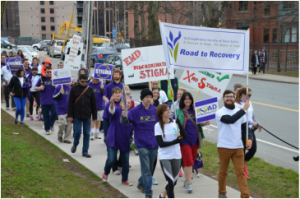 For more information on the Schizophrenia Society of Nova Scotia, go to: www.ssns.ca

For more information on the Service Learning Program, click here.