This year’s first session took place on October 21st, and was titled: “What in the world is wrong with Global Health: A discussion of ethics, policy and activism in approaching Global Health.” Along with facilitator Dr. Bob Huish (Associate Professor, Dalhousie Department of International Development Studies), attendees discussed how we can better our approach to global health.

The role of the media in global health is an important topic to consider. When you think back to the fall of 2014 in the midst of the West African Ebola outbreak, what do you remember seeing in the mainstream media? Widespread panic, fear and despair; photographs of the sick and the dead. One headline on CNN characterized the outbreak as “Ebola: The ISIS of Biological Agents.” The Ebola outbreak was obviously critical, but the representation in the majority of the North American media was very problematic. This was paired with a lack of mobilizing human resources in the early stages of the outbreak, despite the human resources shortage being identified by WHO as a major barrier to control. In all of this, Cuba emerged as a champion for change, sending more than 460 doctors and nurse to West Africa as of November 2014. In addition to their significant human resources role, Cuban health professionals ensured that the photographs they took sent a positive message of hope, progress, partnerships and change, contrary to most of the other photographs shown in the North American media during the worst of the outbreak. The photograph featured below shows a members of the Cuban team making a peace sign, and many of the other photos show team members giving thumbs-up. Furthermore, their names are written on the protective equipment. This humanizes the team members and acts as a powerful tool to put the Ebola outbreak in perspective:  rather than showing anonymous humans who are sick, dying or struggling, we see named team members on the front line conveying positive emotions. Thank you to Dr. Huish for sharing some of the photographs from his presentation! 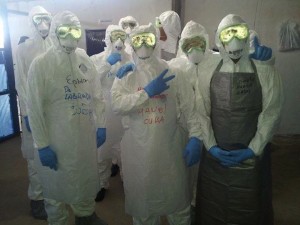 After reflecting upon the characterization of global health in the media, we also took the time to discuss and how we are conceptualizing global health as a whole, and how we may need to re-evaluate our framework. Here are a few of the key topics and messages we discussed in working together towards better health for all:

As noted in the event description, many diseases favour the poor, but the ability to treat and to prevent illness tends to favour the affluent. In order to succeed in our global health endeavours, equitable partnerships must be forged.

In academia, training experiences in global health offer many potential benefits to the individual, as well as the institution. While these are important to acknowledge, they should not be the principal driver of global health initiatives. We need to re-focus on global health as a discipline that works toward achieving equity in health for all.

We often see global health responses as reactionary. Take the Ebola outbreak as an example, there was a rapid outpouring of funding from many of the world’s most wealthy countries as an immediate reaction to this crisis. However, what if we re-focused our efforts on addressing long-term health needs, the social determinants of health (particularly poverty) and advocacy? Shifting our focus in global health “upstream” to structural and developmental initiatives may create a more sustainable alternative. As Dr. Huish noted, “health is always an outcome of development.”

We would like to thank Dr. Huish for facilitating the first Global Health Rounds of the 2015-2016 academic year, and look forward to many more discussions on global health in the year to come. We hope to see you at next month’s event: