… and all through the issue… The British Medical Journal is once again offering research of a distinctly lighter nature.

Past years have recounted studies on “Head and neck injury risks in heavy metal: head bangers stuck between rock and a hard bass,” investigated those in the health professions by testing “…the hypothesis that, on average, male surgeons are taller and better looking than male physicians…,” and investigated Why Rudolph’s Nose is Red. The BMJ has also taken a brave stand against Tooth Fairy Malpractice, and explored using speed bumps in the diagnosis of acute appendicitis.

But the search for knowledge never ends, and this year the Journal dives right in with the results of a pilot study on the preferred state between Being right or being happy. A fascinating question, but as the paper itself admits, this early study has some limitations – specifically,”There was no trial registration, no ethics committee approval, no informed consent, no proper randomisation, no validated test instrument, and questionable statistical assessment. We used the eyeball technique for single patient trials which, as Sackett says, “more closely matches the way we think as clinicians.””

So, not an ironclad conclusion on that one yet, but that’s just one of a wealth of eye- and mind-opening research. Take, for instance Barcelona baby boom: does sporting success affect birth rate? or The Brady Bunch? New evidence for nominative determinism in patients’ health – which draws a positive correlation between the name Brady and the prevalence of bradycardia. (So if your name is Malaria, you really want to avoid the tropics.)

There are practical studies as well, such as The survival time of chocolates on hospital wards: covert observational study. And for art lovers, there’s, “Compulsive plague! pain without end!” How Richard Wagner played out his migraine in the opera Siegfried. (And may we suggest a future study into whether Wagner’s migraines can then be considered communicable through the opera Siegfried.)

Finally, if you’re wondering about the possible medical impact of reading these articles, the BMJ has a Methodical Investigation of Risibility, Therapeutic and Harmful. 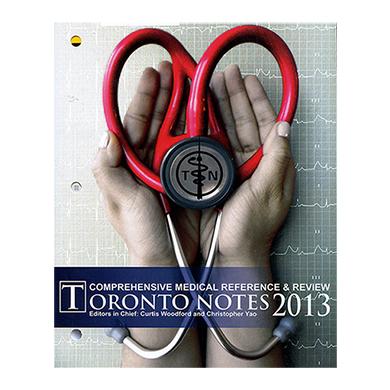 Owners of current editions of Toronto Notes who have been trying to access their online content the last few days have doubtlessly noticed that the site is having problems. As it turns out, the server was the subject of a malware attack that so thoroughly infected the site that they’re having to rebuild from scratch. The editors say the site should be back up around the 23rd.

We’ve finally heard from Toronto Notes about the 2014 edition, and due to some production and marketing delays, it will be arriving about a month later than past years – which is to say, we expect to receive our copies around late-February/early-March.

We’ll post again when they arrive, but feel free to give us a call to check on their status anytime.