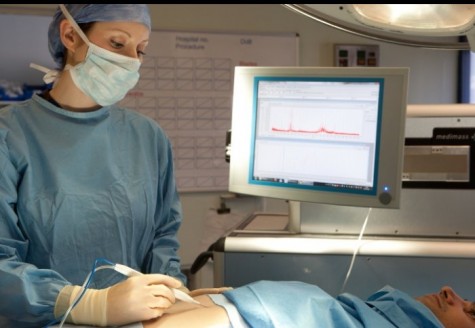 In various news reports, it’s been called a smart scalpel, a magic scalpel, even a scalpel that sniffs, but regardless of the title, The Imperial College of London’s ‘iKnife’ could usher in a significant advance in cancer treatments through surgery.

When cancerous cells are surgically removed, frequently the most difficult aspect of the procedure is deciding where the tumor ends and healthy tissue begins. Taking too much healthy tissue has obvious drawbacks, while checking the borders of a growth during an operation requires keeping the patient under anesthetic while samples are taken to a lab and tested. Such tests aren’t always reliable either, and leaving cancerous cells behind could lead to new growth and the need for a second operation. (The Imperial College estimates that one in five breast cancer patients will need to make a return trip to the operating room.)

The iKnife uses an ‘old’ technology of an electrified knife (traditionally used to cauterize wounds even as an incision is made) along with a mass spectrometer to sample the resulting smoke and detect chemical profiles associated with tumors.This method of instantly analyzing the smoke to differentiate between healthy and cancerous tissue has racked up a 100% success rate during 91 test operations. Clinical trials are next, and the creators see other uses for the technology as well.

A detailed description can be found at the Imperial College London’s website here.