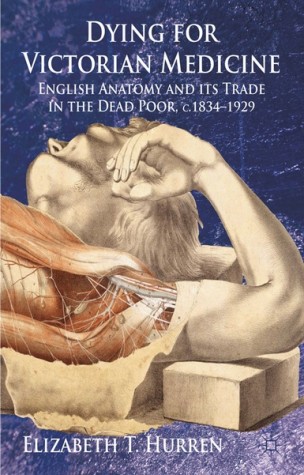 Though we might not like to think about it, pretty much everyone who has benefited from a doctor’s care has also benefited from that doctor’s ability to dissect and examine a human body at some point during their education – and in a recent interview for BBC History Magazine, Dr. Elizabeth Hurren discusses the means of obtaining those bodies during the 19th century. Recorded to promote her new book, “Dying for Victorian Medicine…” the interview is a fascinating period glimpse into the legal -and illegal- trade in cadavers.

Central to the availability of cadavers, and where those cadavers came from, was the Anatomy Act – a law passed by the upper class members of Parliament to codify the supply bodies in a reaction to the fact that “resurrections” (ie. grave robbers) were targeting the graves of the upper and middle class. After the Act passed, the the supply shifted almost entirely to the lower classes, as the medical profession was given legal access to corpses that were unclaimed after death (such as those who died in prison or the workhouse), or were donated by their next of kin in exchange for burial, which the poor could not afford otherwise.

Dr. Hurren also describes the public reaction to the practice in general and the Anatomy Act in particular, relates the stories of some specific donors and suppliers, and even touches on how the nature of the practice impacted on the architecture of where the anatomists did their work, and still impacts today on the research of modern genealogists.

You can find the short (c. 20 minutes) but absorbing podcast here, and if the interview leaves you sufficiently intrigued, the book can be ordered through our campus location or our Virtual Bookstore.