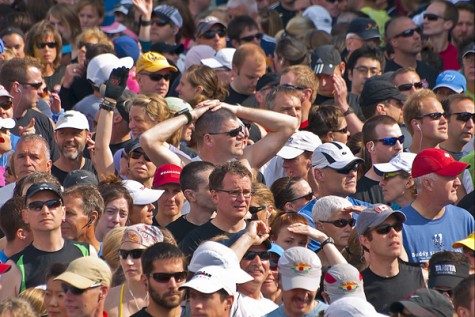 Runners waiting for the start of the 2010 Bluenose Marathon

Well, if you’re planning on taking part in this weekend’s Bluenose Marathon (or a marathon wherever “here” is for you), take heart -so to speak- that despite the popular belief that marathons and half-marathons are heart attacks waiting to happen, a study published in January’s New England Journal of Medicine found that the chances of cardiac arrest at marathons and half-marathons was the same or lower than other strenous activities – and that most heart attacks that did occur were the result of pre-existing problems. (If you’re not a NEJM subscriber, you can find a summary of the study here.)

Of the nearly 11 million runners included in the surveyed races, only 59 suffered cardiac arrest – 40 at marathons and 19 at half marathons. Significantly, a key factor in the survival of runners that did suffer cardiac arrest was the ability of bystanders to start CPR. So if you’re running, the odds are in your favour, and if you’re planning to be in the crowd, now is a good time to watch this video from a few months ago. (You might just save a life…)