You asked–you answered! We crowdsourced a Killam Library suggestion box question about our favorite books of the year, and here’s what we got (click the image to enlarge it). See your own personal fave on the list? Care to add to it? Post your comments, Santa’s watching this blog! 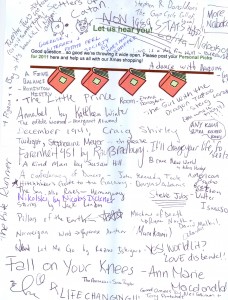 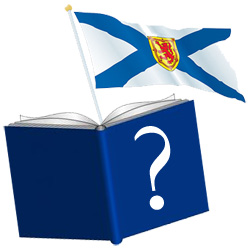 Libraries Nova Scotia is planning a province-wide reading event for adults to promote a love of reading and “unity reading,” with many people reading and discussing the same book. The One Book One Province project will take place next fall in October 2012, just in time for Canadian Library Month.

Many places have successfully carried out “One Book One City” programs in various sized communities throughout the world. CBC’s Canada Reads program is a broad example of a community reading program for adults. The One Book One Province project actively involves public, university, and community college libraries, as well as the Nova Scotia Provincial Library, the Writers’ Federation of Nova Scotia, and booksellers.

What book should we all read? The chosen book must be:

Libraries Nova Scotia needs your help! If you have a suggestion for One Book One Province please submit it using this form.

The survey will be open until December 1st, 2011. May the best book win! 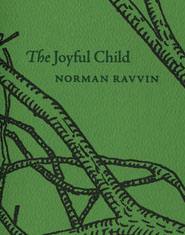 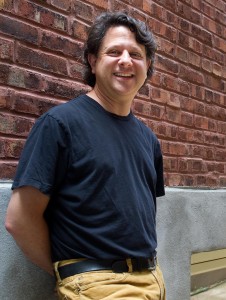 
Read about The Joyful Child on Norman Ravvin’s website

We’re sure there are young book collectors among us who will be interested in Canada’s Third National Book Collecting Contest. The National Book Collecting Contest was created by the Bibliographical Society of Canada (BSC) in 2008 to encourage young Canadians to collect books and study the discipline of researching and writing bibliographies.  The contest is open  to all Canadian residents under thirty years of age as of the deadline date for submissions.  According to the contest page:

The collection must be owned and collected by the contestant.  Entries must be postmarked no later than 5 March 2012.  Check the contest page for more details or download this poster [PDF].

With libraries (including us) increasingly going digital, the whole definition of “library” is up for grabs.

Read this article in today’s Time and tell us how YOU feel about “life beyond the book!” 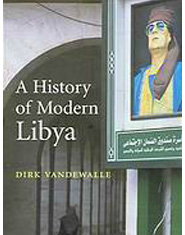 “…For most of the three decades following Mu’ammar al-Qadhafi’s self-styled revolution in 1969, Libya was politically isolated and labelled a pariah state. Dirk Vandewalle, one of only a handful of Western scholars to visit the country during this time, is intimately acquainted with Libya. He offers a lucid and comprehensive account of Libya’s past, and corrects some of the misunderstandings about its present … As the first comprehensive history of Libya over the last two decades, this book will be welcomed by scholars and students of North Africa, the Middle East, and by those who are visiting and doing business in the region. “ Excerpted from the publisher description

The latest issue of the Dal Gazette features a lead article on the Dal Libraries quarter-of-a-million-and-growing electronic book collection. Reading books online is becoming increasingly the norm–it’s great to be able to access what you want when you want it, no matter where you are. But there are issues with ebooks. The vendors from whom we buy them often place restrictions on how many people can access an ebook at one time, or on how much of the ebook can be printed off.

How do you you feel about electronic versus print books? 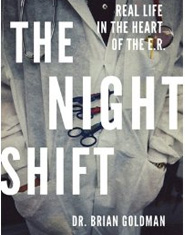 The Night Shift : Real Life in the Heart of the ER

Dr. Brian Goldman is both an emergency room physician at Mount Sinai and a prominent medical journalist. Never one to shy away from controversy, Goldman specializes in kicking open the doors to the medical establishment, revealing what really goes on behind the scenes — and in the minds of doctors and nurses.

In The Night Shift, Goldman shares his experiences in the witching hours at Mount Sinai Hospital in downtown Toronto. We meet the kinds of patients who walk into an ER after midnight: late-night revellers injured on their way home after last call, teens assaulted in the streets by other teens and a woman who punches another woman out of jealousy over a man. But Goldman also reveals the emotional, heartbreaking side of everyday ER visits: adult children forced to make life and death decisions about critically ill parents, victims of sexual assault, and mentally ill and homeless patients looking for understanding and a quick fix in the twenty-four-hour waiting room.

Written with Goldman’s trademark honesty and with surprising humour, The Night Shift is also a frank look at many issues facing the medical profession today, and offers a highly compelling inside view into an often shrouded world. 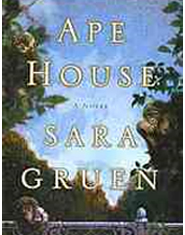 When a family of bonobo apes who know American Sign Language are kidnapped from a language lab, their mysterious appearance on a reality TV show propels scientist Isabel Duncan, together with reporter John Thigpen, on a personal mission to rescue them. An entertaining book that calls into question our assumptions about these animals who share 99.4% of our DNA.

Get it at the Dal Libraries! 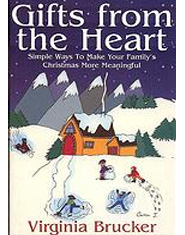 Subtitled “Simple Ways To Make Your Family’s Christmas More Meaningful, “ this book by Virginia Brucker offers a myriad of down-to earth ways to enjoy Christmas as it’s meant to be enjoyed. Chapter titles include “Handmade With Love,’ “Gifts from the Kitchen,” “An Animal Lover’s Christmas” and “The Gift of Imagination”—you get the picture. Happy holidays everyone!

Get it at the Dal Libraries