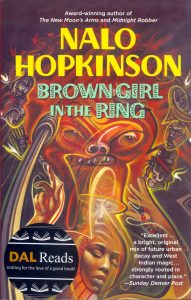 We are pleased to announce the Dal Reads selection for 2018/19 is the sci-fi novel Brown Girl in the Ring by Nalo Hopkinson.

Set in the near future in a dystopic Toronto, Brown Girl in the Ring contains themes of folklore, feminism, and magic realism steeped in Afro-Caribbean culture. The novel won multiple awards around the time of its release in 1998 and was a Canada Reads finalist in 2008. It’s an important book to explore as we celebrate Dalhousie’s 200th year.

Dal Reads is the unity reading program at Dalhousie, designed to encourage community engagement and thought-provoking dialogue among readers. Pick up a free copy at one of the five Dalhousie Libraries and watch for an announcement regarding public events with the author later this year. You’ll also be able to follow any conversation about Brown Girl in the Ring on Facebook, Twitter, and Instagram using #DalReads. This will be a great place to post your thoughts or any questions you might have about the book.

Looking forward to reading and discussing Brown Girl in the Ring with you!

Dr. Daniel Paul, Mi’kmaw historian and elder, will discuss his landmark book, We Were Not the Savages, this year’s official Dal Reads selection. We Were Not the Savages is a history of the near demise, from a Mi’kmaq perspective, of ancient democratic North American First Nations, caused by the European invasion of the Americans, with special focus on the Mi’kmaq.

Free copies of We Were Not the Savages will be available at the lecture. All are welcome. 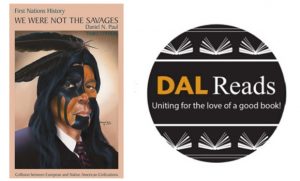 Dr. Daniel Paul, Mi’kmaw historian and elder, will discuss his landmark book, We Were Not the Savages, this year’s official Dal Reads selection.

Free copies of We Were Not the Savages will be available at the lecture. All are welcome. 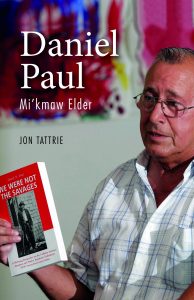 Join Jon Tattrie and Daniel Paul for the launch of Dr. Paul’s biography. Dr. Paul is the author of this year’s Dal Reads book, We Were Not the Savages.

The event will be opened by HRM Poet Laureate, Rebecca Thomas.

This event will also feature a solo a capella performance by Truro native, Ashton Jacklyn. 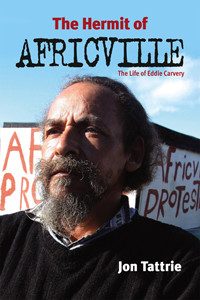 Free copies of the book will be available at the event.

Join us on Wednesday, November 23 for a reading with author Jon Tattrie followed by a panel discussion with Faculty member and Director of Dalhousie’s Transition Year Program, Dr. Isaac Saney* and Executive Director of the Africville Museum Sunday Miller. This year’s book selection is The Hermit of Africville. Free copies of the book are available at all five Dal Libraries and at the front desks of the residences.

*With thanks to Dr. Wanda Thomas Bernard, who was originally scheduled to be on our panel but has a scheduling conflict with her new duties as a recently sworn-in Senator in Ottawa. Thanks to Dr. Isaac Saney for stepping in.

Lawrence Scanlan, the author of the Dal Reads 2015 selection A Year of Living Generously, is coming to Dalhousie!

Lawrence has been a journalist for almost four decades – with daily newspapers (editor of The Nelson Daily News in B.C., literary editor of The Whig-Standard in Ontario), magazines (managing editor of Harrowsmith), and in radio with two national CBC programmes (producer on Morningside and Writers & Company). He has won numerous prizes for his writing, including three National Magazine Awards.

A Year of Living Generously, follows Lawrence as he volunteers with 12 different charities, among them well-known institutions Habitat for Humanity, the St. Vincent de Paul Society and Canadian Crossroads. Drawing from first-hand experiences, he tests the ideas and theories on global aid and charity and makes a compelling case for greater commitment and real connection, in the form of on-the-ground volunteer work, from us all.

Don’t miss this opportunity to see Lawrence Scanlan in person as he reads from A Year of Living Generously.

You can pick up your free copy at any of our five libraries! 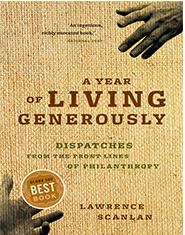 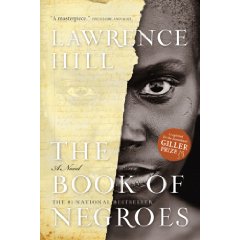 This summer Student Services has suggested to all Dal students that they read Lawrence Hill’s award-winning novel The Book of Negroes, winner of this year’s CBC “Canada Reads” competition. On September 9th there will be a series of group discussions of the book held around campus, including one at the Killam Library. This will be the first of what will hopefully will be an annual “Dal Reads” event.

Check out the new Dal Reads blog and view the video of Jian Ghomeshi’s interview with Lawrence Hill. Read the actual text of the original Book of Negroes online at Black Loyalists: Our History, Our People. If you’ve read Hill’s The Book of Negroes or are reading it right now, tell us what you think of it!