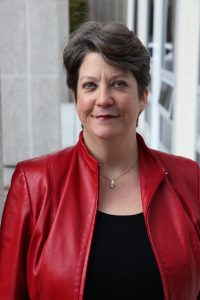 To recognize International Open Access Week from October 21–27, we had a chat with Lucie Guibault from the Schulich School of Law about what open access means to her and what it could mean for Dalhousie and the world.

“I have a broad vision; I want to save the world with open access.” – Lucie Guibault

Lucie Guibault is passionate about open access, and she thinks you should be, too. She sees open access — the practice of sharing research outputs online without any access barriers — as the gateway to finding solutions to the greatest challenges facing humankind.

While Lucie was steeped in the practice of open access publishing at the University of Amsterdam, she always kept an eye on how things were progressing at home. “When I returned to Canada, I came with a mission for myself to put open access in a greater light. I don’t want to preach, but I would like scientists to open their minds to the conversational aspect of science,” says Lucie. “Science is like a conversation between scientists to gain greater knowledge from each other and to solve problems. You cannot solve problems if you are isolated,” says Lucie.

The isolation Lucie refers to is the traditional model of publishing that is still happening in Canada and around the world. The cycle goes like this: research is conducted at academic and other institutions; research results are published in journals by commercial publishing companies; commercial publishers sell subscriptions of the journals to academic libraries at prices that raise annually, often higher than inflation rates; and due to the publisher’s licensing restrictions, academic libraries can only provide access to affiliated students, faculty and staff. No one else, including the public, unaffiliated researchers, or funders can access the content unless they visit the academic library in person or subscribe to the journal themselves. In this model, the published articles are behind a paywall for the majority of society. Under this model it’s not surprising that many articles remain unread.

New models break with traditional publishing venues, providing researchers and academics with opportunities to release their research in pre-print or post-print research repositories or to publish in open access journals, and to retain their author rights when they publish in commercial journals. When authors retain their rights, they have the power to share their work publicly in a variety of venues, for all to read.

In Canada and internationally, alternative sustainable funding models for open access publishing are also being negotiated, including transformative agreements that convert subscription fees and article processing charges into a consolidated amount, eliminating the need for libraries and researchers to pay twice for ‘read and publish’ rights, and providing open access to the public as well. Public access to university research promotes citizen science and injects equity into global research efforts.

Some academics see publishing their work in an open access journal as a barrier to progressing in their careers. In some disciplines, there is pressure to publish in a journal with a high impact factor as part of the tenure and promotion process. The Journal Impact Factor (JIF) is a metric calculated by Clarivate (formerly Thomson Reuters) for a small fraction of eligible journals, the vast majority of which are not open access.

In the past decade, open access journals have become more established as renowned scholars join the editorial boards, but despite this, Lucie doesn’t see much of a challenge being made to the impact factor system as the true assessment of a journal’s value. As long as institutions or disciplines require academics to publish in journals with high impact factors as part of the tenure and promotion process, many scholars won’t make the move to publish their research in an open access journal unless it has a high impact factor rating.

“I know it’s a lot to ask academics to publish in open access journals because I know that people are worried about their careers,” says Lucie. “But we have to change our perceptions around what it means to publish in a journal. Instead of choosing a journal just for its impact factor, other factors need to be considered. I think visibility and accessibility are the most important factors in getting your articles read, and you achieve that through publishing in an open access journal.”

Lucie understands there are other reasons why some researchers may be reluctant to publish in open access journals. “It’s a lot of the researcher’s time and effort to interview subjects, transcript recordings, organize ideas, carry out experiments, analyze data, and finally, publish the results,” she says. If an academic publishes in an open access journal, it might feel like they are “giving away” their conclusions and data, but what they often don’t realize is they are already giving away their author rights to publishers in the traditional model. “If researchers are able to carry out their work because they are funded by a government grant, then the results of that research actually belong to all of us,” Lucie says.

In addition to open access publishing for articles, sharing data through open access publishing could be a powerful way to maximize global efficiency in research. “We could eliminate so much unnecessary, double research if data sets were published through open access,” says Lucie. Researchers could use the data to further their ideas instead of spending time and public money reinventing the wheel by duplicating research. “Or, you create new opportunities for researchers by offering a data set that was created for one purpose by allowing other researchers to use it for another purpose,” says Lucie.

The social impact of sharing data could be an effective means of measuring the value of open access. “If you think about medicine, environmental studies, chemistry, engineering — all the fields of science — the research should be accessible to everyone in society. There are so many parts of the world that would benefit from research being done in so many areas of science. And what is more rewarding than to see your work being cited, read, and distributed?” asks Lucie.

At Dalhousie and across Canada, there are many on board with Lucie’s way of thinking, particularly those in academic libraries. Locally, the Dalhousie Libraries provides a wide range of open access possibilities for researchers who are ready to adopt open access principles, including options such as publishing an open access journal on the Dal Libraries’ Open Journal (OJS) site and depositing publications in DalSpace, Dal’s institutional repository, for long-term public access. Other digital initiative services offered by the Dal Libraries include data management, digital preservation, and providing advice around author rights and retaining copyright. Dalhousie Libraries is also entering into, and actively pursuing, new agreements with publishers that build in open access, such as Canadiana Online, Open Library of the Humanities, Sustainability Coalition for Open Science Services (SCOSS), and more.

The scholarly publishing environment is in a state of transition and open access initiatives are gaining momentum on campuses locally, regionally and nationally, but true change starts with one faculty member, one researcher, at a time.

Lucie still sees a place for publishers in an open access landscape. “Some publishers have already reinvented themselves by offering services over a final product. Publishers can provide services like creating a community or a space for conversation, linking to related articles, designing attractive layouts, adding images, and providing access to the back catalogue,” she says.

In the meantime, Lucie is troubled by the profits the publishers are earning from publicly funded research that should be benefitting the world. “We need to unite,” says Lucie. “The conversation is a global conversation. Competition law will not address this particular issue.”

Before saving the world with open access, Lucie has identified a smaller, but still ambitious, first step on the way. “My dream would be to have Dal adhere to the principles of open access.” These days, with pressing issues like climate change on everyone’s mind, there seems to be no better time for Dal and the world to embrace open access to facilitate global progress.

For more information about open access options related to your publications and research data, past and present, contact the Dalhousie Libraries.