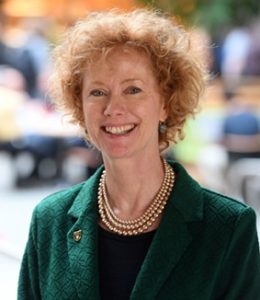 Donna Bourne-Tyson, University Librarian of Dalhousie, has won the prestigious Ken Haycock Award for Promoting Librarianship from the Canadian Federation of Library Associations, presented at the OLA Superconference in Toronto on January 30. Donna received this award for her significant contributions to the field of librarianship, to which many of her colleagues at Dal can attest.

Sincerest congratulations to you Donna, from all of your Dal Libraries colleagues. See below what the Canadian Association of Research Libraries (CARL), the nominating institution, had to say:

February 4, 2019 – The Canadian Association of Research Libraries (CARL) would like to congratulate current CARL President, Donna Bourne-Tyson, on receiving the Ken Haycock Award on January 30th at the OLA Superconference in Toronto. This award is conferred to an individual who has made significant contributions to the public recognition and appreciation of librarianship through professional performance, teaching, and/or writing.

Ms. Bourne-Tyson was honoured with this award for her firm commitment to personal membership in professional associations and her remarkable range of Board roles in regional, national and international association and consortia, and for founding and shepherding multiple new organizations.

“Donna believes and lives a philosophy that working together is much more effective than solo or siloed action. Through her collaborative view of the library world, Donna has brought together people, institutions, and even associations to effect consortial action. And through this, she has had long-reaching impact. Donna has quietly and pragmatically helped shape the library association landscape in this country,” said Paul Takala, Chief Librarian, Hamilton Public Library, during the award ceremony.

CARL is pleased to have nominated Ms. Bourne-Tyson for the award, in recognition of her association engagement and her leadership and dedication as an ambassador and role model for librarianship. The award includes a $1,000 reward, which Ms. Bourne-Tyson has graciously donated to the Canadian Federation of Library Associations.