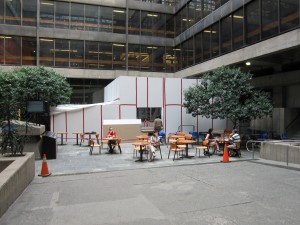 Construction has begun this week on a Subway outlet in the Killam Library atrium. They’ll be demolishing some of the concrete infrastructure beginning tonight from 9pm until 7am; this will take approximately 2 weeks to complete (the noisiest work will happen only while the library is closed).

The work will also include some retrofitting of both the Library Bistro and the Second Cup to allow for changing traffic paterns. The Bistro will be reorganized tomorrow (August 24) to allow a reduced Second Cup to operate in that space. Coffee, pastries, sandwiches, and packaged salads will be available during this period, but no espresso-based or blender drinks . Next week the Second Cup will close and be retrofitted.

We apologize for the disruption!