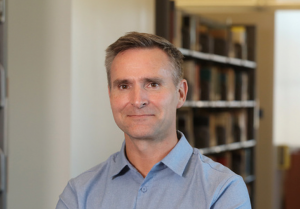 On August 15, Michael Vandenburg will begin his five-year appointment as Dean of Libraries at Dalhousie University. Current Dean of Libraries Donna Bourne-Tyson will be retiring after eleven years of extraordinary leadership.

Since May of 2021, Michael has been the Interim Executive Director of the Ontario Council of University Libraries (OCUL). OCUL is the consortium of Ontario’s 21 university libraries, committed to maximizing collective expertise and resources through collaborative efforts. While at OCUL, Michael provided leadership for current initiatives and services, and actively engaged with member library directors to review the consortium’s governance and develop new strategic directions.

Before that, Michael spent twelve years at Queen’s University Library, most recently serving in Acting and Interim Vice-Provost & University Librarian (VPUL) roles. Michael provided leadership for the library and the university through a period of significant change, including navigating the countless operational shifts required due to the pandemic. He also led the allocation and management of library resources in support of university goals and played a key role in developing and supporting the library’s Information Resources Strategy, Digital Asset Management Strategy, and Action Plan to Support Anti-Racism, Diversity, Inclusion and Indigenous Cultures. Representing Queen’s, he worked with OCUL to implement a shared library services platform for 13 Ontario libraries, improving access to library resources for the Queen’s community.

Prior to arriving at Queen’s, Michael worked in public and government libraries in Nova Scotia, Pennsylvania, and Ontario in roles focusing on the digital transformation of library systems and services. As a proud Dal alum (BA’88, MLIS’94), Michael is thrilled to be returning to Nova Scotia and Dalhousie as the Dean of Libraries.