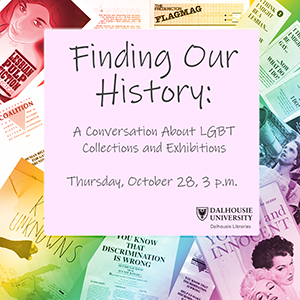 To celebrate LGBT History Month, join our group of panelists for a showcase of 2SLGBTQIA-focused collections, exhibitions, and history projects from across Atlantic Canada. Moderated by Nova Scotia LGBT Seniors’ Archive founder Jacqueline Gahagan, panelists will discuss how these projects enable members of the community to find, access, and interact with information about 2SLGBTQIA history in the region.

This event is presented by the Dalhousie Libraries, home of the NS LGBT Seniors’ Archive.

Watch the recording of the webinar.