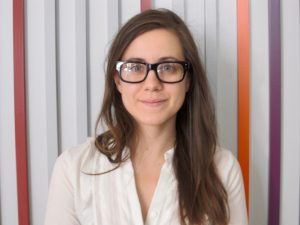 What brought you to the MLIS program at Dal?

The MLIS program at Dal seemed to be more flexible than other schools, striking a nice balance between information science and librarianship. Also, I had never been to Atlantic Canada and was looking to make a move from Calgary to see parts of Canada I haven’t been to before.

What drew you to the internship at the Dal Libraries?

After talking to the second-year students of the MLIS program, I was excited to see that W.K. Kellogg Health Science Library offered their interns experience in a multitude of library and research areas. Along with that, I was drawn to the health sciences as an area that I have always had an active interest in, but did not have the proper background to enter. The Kellogg offers me that opportunity.

I graduated with a Bachelor of Arts in English and a minor in Art History from Mount Royal University in Calgary. I then got ACE TESOL certification and taught ESL both abroad and domestically. I also worked as a technical writer, and attended professional development workshops in grant and proposal writing, which have served me well both personally and academically.

What have you been doing during your internship?

In my internship, I help patrons at services points, answer reference emails, assess and update LibGuides, create and update instructive library videos, and be of general assistance. In addition, under the guidance of my supervisors here at the Kellogg, I have helped in more intensive research requests. This summer, there is also a large collaborative project in which all of my fellow interns and I are helping research and compile texts and information for Dalhousie University’s 200th anniversary.

Fun and interesting facts about you:

I really enjoy running, and my partner and I are running the MEC half marathon in October.

In addition to my academic studies, I am also on the Dalhousie boards of CAPAL and ACA. I also have had the honour of being selected as a judge for ALIS/NA’s Melva J. Dwyer Award. It’s really exciting to be a part of the process and to have an excuse to do all the reading I’ve wanted to do all year.