The Canadian Association of Research Libraries has elected Donna Bourne-Tyson, Dalhousie’s University Librarian, as CARL President for a two year-term, 2017–2019. “It’s a great honour to serve the research library community in Canada in this capacity,” said Donna. “Academic research libraries are at the vanguard of technology as the sharing and dissemination of information shifts to digital environments. It’s a time of rapid change and growth for libraries.” 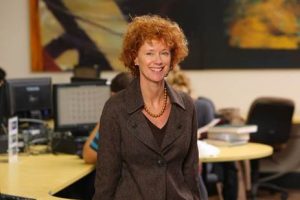 Donna has recently commenced her second term as the University Librarian at Dalhousie and has been in the role since 2011, previously having served as the University Librarian at Mount Saint Vincent University. Currently, she oversees a team of 120 librarians and staff and ensures Dal Libraries meet the needs of the Dalhousie community through supporting initiatives such as open access, scholarly communications, research data preservation and learning communities.