Henry Locker is a third-year Bachelor of Commerce student who recently completed a four-month co-op in Vietnam as an Asia Representative. Originally from Halifax, he chose Dalhousie’s Commerce program for the mandatory co-ops and the opportunity to gather a real work environment while exploring multiple industries. “The co-op program is very reputable and unique with 3 staggered co-op placements. This gives me the ability to test the water in many industries” said Henry. 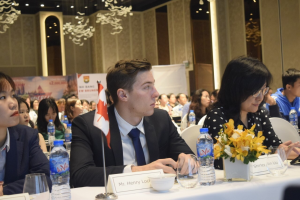 Henry used his networking skills and reached out to friends’ families to find this job. Over the last fall, Henry secured a self-developed job with Confederation Partner in Vietnam, an international finance and service company. Confederation offers many methods for high net-worth individuals and their families to become dual citizens in Canada, USA, European Union, and the Caribbean Islands. He was attracted to this job because the work was inspiring, and he enjoys the satisfaction that this service offers. As an Asia Representative, he performed a variety of different roles, finding the appropriate location for an office at an appropriate price and working with the marketing team to market the company to prospective clients. He was a keynote speaker at 8 seminars with attendance ranging from 30 to 100 people.

Henry spoke to us about his transition, saying “The biggest difference between working in Canada and Vietnam is that Its very common for a workweek in Vietnam to consist of Monday through Saturday 8am to 6pm, and it’s common for most people to even bring work home with them. Even the communication preference is different, most people used an instant messaging app instead of email.”