BioMed Central is an STM (Science, Technology and Medicine) publisher based on the open access publishing model. The Dalhousie University Libraries has recently become  a “Supporting Member” in BioMed Central.  For Dal authors who wish to publish in  BioMed Central or SpringerOpen journals, this membership allows for a reduction of 15%  on  the article processing charges (amounting to savings of about $250-$300 per article).  Any article submitted from a Dalhousie IP will automatically be provided with the membership reduced rate. 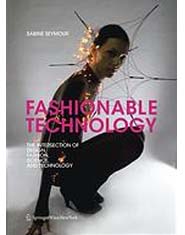 Fashionable Technology: The Intersection of Design, Fashion, Science, and Technology By Sabine Seymour.

A compact introduction to the interplay of electronic textiles and wearable technology with fashion, design and science. Sabine Seymour offers an explanation of the role technology plays in a fabric or article of clothing, with numerous illustrations. Features the latest projects of over 50 well-known designers, research institutes, companies and artists, including Philips, Burton, MIT Media Lab, XS Labs, New York University, and International Fashion Machines. A must for all those wishing to know everything about “wearables”!

Please note that access is restricted to Dal users only. 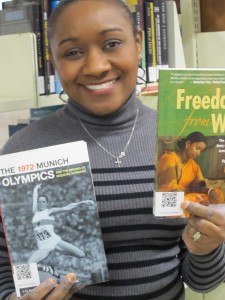 At Dalhousie Libraries, we like to play with innovative technology. Right now we’re placing QR codes in key spots to help you find what you’re looking for, using your smartphone.

QR (Quick Response) codes are barcodes that you scan with your mobile phone or laptop computer. When you scan a QR code, a web page will open directing you to more information on the service you’re looking for. Originally developed by Toyota in 1994 to help them track vehicle parts, these pixelated squares have all kinds of uses. For example, if you’re trying to book a study room in the Killam or Kellogg library, take a photo with your iPhone or Blackberry’s QR Reader to see if the room is available and book it on the spot. The recent launch of iPad 2, with its excellent choice of e-readers and snappy new built-in camera, inspired us to start adding QR codes to books in the Killam which we also have in digital form.

To scan a QR code, download a QR reader. We recommend i-nigma for your iPhone, but there are many different QR apps for whatever mobile device you use. Try these codes for yourself and see how they work!

Scan this code to book a room in the Kellogg Library

Scan this code to see available computers in the Killam Library

The possibilities for using QR codes are limited only by your imagination. How about posting a code for library hours on residence bulletin boards? Or a code for the Chemistry Subject Guide right in the Chemistry Department? Do you have any suggestions on what Dal Libraries QR codes you might find useful? Reply to this post and let us know. We’re waiting to see what ideas you have!

Earlier this year there was a massive change in technology.  This change affects billions of people today in subtle ways, but lays the groundwork for very profound developments.  Google has fundamentally altered the way it deals with it’s search index.

The details behind their move to “Caffeine” from “MapReduce” will be written in papers, spoken about at conferences and will stand as a significant milestone in the realm of big data.  However, most of the billions affected by the change though will hear nothing the change or of the technical details, nor would they care if they did.

Using the absolutely massive computing resources available to Google and some of the best large-scale software ever produced, it still took Google from 8 hours to  two weeks (depending on the layer they were updating) to digest the planet’s web pages and produce a new index for us to search.  They decided long ago that this simply wasn’t going to be good enough.  An 8 hour to two week turnaround on the planet’s web presence sounds very impressive, and it is truly impressive, but it’s not instant.  Needing to wait as little as 8 hours before new web pages can be discovered sounds perfectly reasonable, but it’s not instant.  That’s what Caffeine is about.  It fundamentally changes how Google addresses its data in a manner that allows them to change and update small parts instantaneously rather than need to re-crunch an entire index.  Google can, and eventually will provide instant discovery for the world’s public web resources.

Like most major infrastructure changes, the effects will not be immediately visible.  The ultimate effect of the US Interstate Highways was not obvious in the 1950s, but looking back today, it’s clear that they fundamentally shaped the US into what it is today.  Caffeine will be the same.  It will have a small impact at first, allowing Google to provide slightly fresher search results (50% fresher by Google’s measure) and will no doubt result in a few other new features that they’ll roll out over the coming months.  But as time goes on, instant discovery will entrench itself into the way we work and play.  It will do so subtly, but soon we will remember the time before instant discovery the way we remember the time before e-mail on our phones or the time when we had no Internet altogether.

On Saturday August 7 Springer, one of the Dalhousie Libraries’ major providers of e-content in science, technology and medicine, is launching their new SpringerLink platform. On this date the current site will be discontinued and all users will automatically enter the new platform.

The new SpringerLink platform features many improvements based on comments and feedback from an extensive usability study. On the new platform you‘ll find:

A database of 4555 online books published by CRC/Taylor & Francis in the areas of Engineering, Information Technology, Chemistry, Biomedical Science, Business Management and much more.

This database trial is available via campus access only. Please send your comments to Ian Colford

Dalhouse University Libraries, as a member of the Canadian Research Knowledge Network (CRKN), has acquired for the Dalhousie community substantial holdings in SpringerLink, Springer’s online content. Springer is one of the world’s leading publishers of books and journals in science, technology and medicine.

Dalhousie’s holdings in SpringerLink include the complete archive of and ongoing subscriptions to more than 1300 journals (i.e. the journal content goes back to vol. 1). We have also just acquired the complete catalogue of Springer ebooks (over 13,000 titles) from 2005 on. This catalogue includes imprints other than Springer, as well as many “books in series” and reference works.

To view or search this collection, visit the SpringerLink website at springerlink.com/ Materials accessible by Dalhousie users are marked with a small green box.

You may also access individual Springer ejournals through our ejournals webpage at www.library.dal.ca/Find/Journals/ as well as through the Novanet catalogue.

Springer books may also be accessed directly through MyiLibrary.

Please note that most Springer ebooks are not yet available in Novanet. Records for these books will be added over time.

To find out more about SpringerLink, see their brochure.