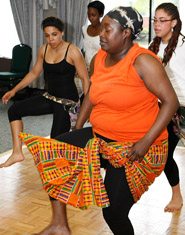 Mufaro Chakabuda, CEO and Founder of the Maritime Center for African Dance (MCAD), is launching her book From $20.00: An Artrepreneur’s Success Story with a reading and celebration at Dalhousie’s University Club. Featuring music, dancing and refreshments, the launch party promises to be a blast!

Mufaro graduated from Dalhousie in 2002 with a BA in Sociology & Social Anthropology, minoring in business. She had come from Zimbabwe to the Maritimes as a student and founded the MCAD in 2005 with a start of only $20, later expanding the business to other provinces within Canada and internationally. In 2011 she was nominated for ZimExpo Business Leader of the Year and for the RBC Award for Excellence in Entrepreneurship. She is currently Chair of Chaks Publishing House and President of Zimscholarship.com, a charity for scholarships for Zimbabwean students. Dancing is her passion, her life’s work, and a deep connection to her home in Zimbabwe.

The Maritime Centre for African Dance is an organization dedicated to teaching, sharing and promoting African Culture though the art of dance, to youth and adults across Canada. To date, MCAD has taught well over 700,000 children and adults in schools, community centres, camps and programs. The adult dance troupe of the Centre was the only Canadian group chosen to perform for President Obama’s African Inaugural Ball in Washington in January 2009!