In a corner of the basement of the Sir James Dunn Law Library, behind an unassuming door, is a room on campus like no other. The soft lighting, the solid wooden furniture, and the strains of Glenn Miller coming from a Bakelite radio are some of the things that may first catch your attention as you enter the room.

A closer look reveals you’re in a lawyer’s office from seventy years ago. The cast-iron typewriter, the crystal decanter and tumblers, the pipe and ashtray, and the Brownie camera, along with decorative touches such as the fireplace façade and the vintage photos on the walls add to the immersive experience of the room.

This room that looks like it’s been sealed off from the world since the 1940s is not the former office of some long-retired barrister that’s been preserved, shrine-like. It’s an escape room – like those trendy themed rooms that have been popping up all over the city. Escape rooms are described as adventure games wherein participants must solve a series of puzzles and riddles in a set time limit, all while trapped in a room.

The Law Library’s escape room was developed and curated by law librarians David Michels and Hannah Steeves. Assistance came from a $1,000 grant from the Council of Atlantic University Libraries (CAUL) and a grant for $780 from the Dalhousie Centre for Learning and Teaching. David, the brains behind the initial concept, explains, “We designed the escape room to test the research skills of law students in a fun and unusual way.” 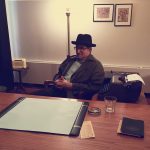 David really getting into the escape room’s aesthetic. 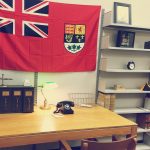 Working vintage telephone participants can use to call for clues. 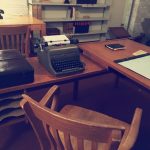 Detail of the Crown Prosecutor’s desk. 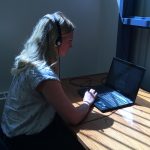 Hannah monitoring what’s going on in the escape room. 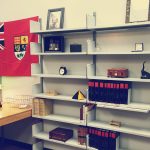 The vintage Dal beanie is just one of the charming antiques in the room.

There is a gap between when the first-year students take the legal research course and when they’re working in firms and using those skills in their second and third years. “We want to compare the retention of the first year students, who’ve just had the instruction, to that of the second and third year students,” said David. Previously, the law librarians had been recruiting volunteers and testing their legal research skills retention in a more traditional way, but David admits it was tough to get volunteers for such an activity.

It’s hard to believe that when he started working on this idea, David had never been in an escape room. David and Hannah started working on the room in March 2018 and did a period of testing with students and faculty. After making some adjustments based on the several months of testing, they’ve been running the escape room with students since January.

Groups of five go into the room where they spend an hour solving a mix of logic and legal research puzzles. David and Hannah observe the escape room participants from a laptop just outside the escape room that’s connected to a web cam in the room so they can hear and see what’s going on.

“A lot of research the first year students are doing is online and to solve the puzzles in the escape room, the students must use print legal resources. So we’re getting back to basics and teaching them some skills they will find useful,” said Hannah.

“You really see the hive mind at work here,” adds David. “The groups that communicate well tend to do better in the room.”

This just might be the first escape room in an academic library in Canada, although Hannah notes that many public libraries are doing escape rooms. “We have had a lot of interest from faculty and students from a number of law schools. During the law library conference that was in Halifax last spring, directors from law schools across Canada toured the room,” said Hannah.

The premise of the Law Library’s escape room is that Halifax’s Crown Prosecutor has been kidnapped an hour before he is about to take on the mob in court. Without the Prosecutor’s papers, there’s no way the crown can win the case. Participants have one hour to solve all the legal research puzzles in the room, leading them to the papers that will solve the case — or the mob walks.

They named the fictional Crown Prosecutor after a current legal research instructor at the Schulich School of Law, Jonathon Shapiro. “Using her PhotoShop skills, Hannah has hidden a number of Jonathan Shapiro Easter eggs in the room,” said David.

The room even features a working period phone. “Emily, our intern, figured out how to rewire the phone. It was a challenge to integrate the phone into Dalhousie’s network, but it works,” said David. Escape room participants use the phone to call for clues and to announce when they’ve solved the room. An unexpected outcome of having gone through the escape room is students getting a lesson in using a rotary telephone and a typewriter.

One of the local antique shops really got into the project, showing David items they thought would work in the room whenever he stopped by. “There are so many things we could add, and there’s lots of potential to run the room in different iterations,” said David.

“We will be preparing a report for CAUL about the escape room. Even if we determine this was not a good way to measure retention of legal research skills, we have increased participation in library activities through gamification. As a result of that, we’re seeing students spending more time in the library because it’s become a familiar place,” said Hannah.

If you get a chance to visit the Sir James Dunn Law Library’s escape room, take the time to look at everything. The attention to detail David and Hannah have put into the room will make you wonder if they should be in the business of escape rooms full-time.