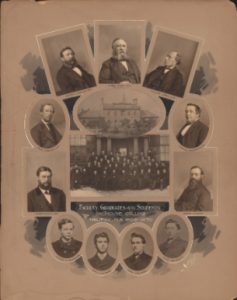 The exhibit follows the format of the books, with a section for each chapter. Within each section, Alice and Geoff have selected a handful of topics to highlight. Some of the topics, like Thomas McCulloch or the Dalhousie No. 7 Stationary Hospital, are important parts of Dalhousie’s history that many people are already familiar with. However, the team tried to also select topics that were less well-known and might provide some insight into the everyday lives of Dalhousians throughout the school’s history.

The full text of The Lives of Dalhousie has been published on GitBook and is linked throughout the exhibit, so viewers can read more about Dalhousie’s history if they so desire.

As a further celebration of Dalhousie’s 200th anniversary, the Dal Libraries has put together a timeline for each day of 2018 that includes many of the images found in our Lives of Dalhousie University exhibit. The timeline is our way of connecting Dalhousie to the broader community by featuring an event, historical photograph or other material for each day of 2018. With such a rich history, we had plenty of material to choose from. The timelines are being posted on a monthly basis and offer a fun, informative and sometimes whimsical view of Dalhousie’s past.