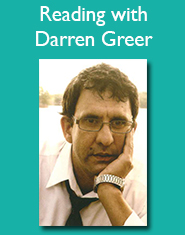 Darren Greer is the author of three novels and a book of essays.

He grew up in several towns in Nova Scotia, including Greenfield and Liverpool, and studied literature at the University of King’s College, Halifax, as well as Carleton University, Ottawa.

Greer’s first novel, Tyler’s Cape, was published in March 2001 to critical acclaim and was on the bestseller list of the Halifax Chronicle-Herald. Still Life with June was nominated for the Pearson Readers’ Choice Award at The Word On The Street, Toronto, in 2003 and is the Winner of the 2004 ReLit Award.

Don’t miss this chance to see Darren Greer tell his stories in person!
This public reading is sponsored by the Canadian Literary Collections Project