The IT staff have been even busier than usual over the last four weeks as they replaced the computers in all four libraries.

The computers will run the Microsoft Office 2010 suite, which includes Word, Publisher, PowerPoint, Excel and Access. The computers will also continue to run statistical programs and software such as MATLAB, Minitab, SPSS, Maple and SAS. For students interested in using the new 3D printer in the Killam Learning Commons, 3D modelling programs such as MeshLab, Google SketchUp and Solid Edge will also be available on the new machines.

Included in this batch of new computers are 20 new iMacs. “We’re replacing the nine older iMacs we already have and 11 of the old PCs with new iMacs,” said Marc.  All of the old computers will be returned to the company that Dal leases them from where they will be refurbished and reused. 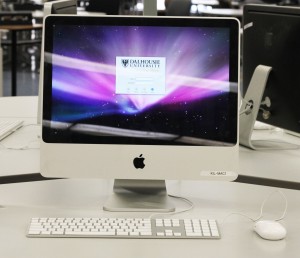 One of the new iMacs in the Killam Learning Commons.

All of the new computers are expected to be installed by the end of the week.