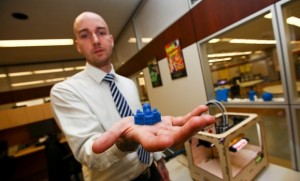 Michael Groenendyk with a model of the Taj Mahal that was printed on the 3D printer at the Killam. (photo by Bruce Bottomley)

The Dalhousie Libraries are wishing Mike Groenendyk the very best in his new position as the Business Librarian at Concordia University (starting August 19).

Mike graduated from Dalhousie’s School of Information Management program this spring. While still in his first year of the program, he and classmate Riel Gallant approached the Dalhousie Libraries with a radical idea to get a 3D printer in the Killam Library.

Both University Librarian Donna Bourne-Tyson and head of Library Information Technical Services Marc Comeau agreed to give it a try. The project has been so successful that it’s been expanded to include the Sexton Library, with more 3D printers to come at other Dal Libraries in the future. Mike and Riel’s goal was to democratize 3D printing, meaning that it had to be inexpensive and in a public space, and they achieved this goal in a very short time.

In addition to bringing accessible 3D printing to Dalhousie, Mike also worked at the Help Desk in the South Learning Commons in the Killam Library. There he provided assistance to staff, students and faculty regarding the use of Dalhousie-supported software, personal computers, email,  and wireless Internet. He also provided assistance with other IT-based services such as web hosting, worked on the transition to Dalhousie’s new Office 365 email and collaboration tools, helped print incoming 3D model submissions, and helped to prepare the new 3D printers that recently came in.

Mike, we will miss you. Concordia is lucky to get you!