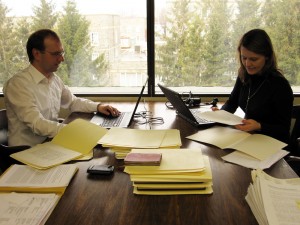 Holger Pils and Karolina Kühn from the Lübecker Museen’s Buddenbrookhaus are currently working in University Archives and Special Collections (DUASC) on the Elisabeth Mann Borgese collection. Museum Director Pils and science staff member Kühn are examining Elisabeth’s papers in preparation for a major exhibit they are mounting in Lübeck to mark the 10th anniversary of her death. The exhibit is being mounted with major support from the International Ocean Institute and in partnership with the Geomar, Helmholtz Centre for Ocean Research Kiel.

Lübeck was the original home of the Mann family, whose members include the Nobel Prize winning writer Thomas Mann, Elisabeth’s father, and the novelist Heinrich Mann, her uncle. Elisabeth was born in Munich, but the Mann family left Germany after Hitler came to power, moving first to Switzerland and then to the United States. In 1978, Elisabeth relocated to Halifax, and became a Canadian citizen. 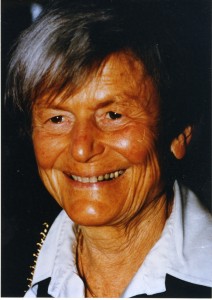 As a Killam Fellow, Elisabeth taught courses at Dalhousie in Political Science and continued her work on projects relating to disarmament, international development, integration of marine resources and marine management. Awarded the Order of Canada in 1988, Elisabeth is remembered primarily as the founder of the International Oceans Institute and as a passionate advocate for environmental issues.

Holger and Karolina are very excited about the biographical exhibit they are planning, which will focus on Elisabeth’s life, work, and the impact of her legacy. It will also highlight her personal relationships: her love for her father, her complex relationships with her brothers and sisters, and her marriage to Giuseppe Antonio Borgese. “Germans identify strongly with the Mann family,” says Holger, “some even call them ‘the Windors of Germany’ because their lives are so vivid, full of contradictions and tragedies. But we know them primarily as talented writers and humanists. Elisabeth’s life work on the protection of the oceans is less well known in Germany than it is here.” The exhibit will include not only her papers but also photos, films and interviews, and personal belongings from her estate, as well as paintings and a bust of Elisabeth done by her father Thomas. “We’re trying to cover all of the life,” Holger explains, “to give a holistic picture of what drove her, what was behind her view of the world. We’ll make it a real show!”

The Elisabeth Mann Borgese collection is one of DUASC’s largest and most significant holdings. It was donated to DUASC in two parts, the first by the Public Trustee of Nova Scotia after Elisabeth’s death in 2002, and the second by the International Ocean Institute in 2009. A finding aid with a detailed description of the collection is available online.

“Elisabeth Mann Borgese and the Drama of the Oceans” will be on display at the Buddenbrookhaus from June through October 2012. It will then travel to Kiel, Berlin, and possibly abroad in 2013. The Buddenbrookhaus museum also holds an archive of the Mann family papers.