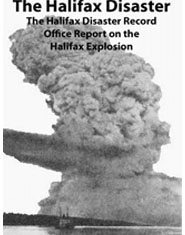 On the morning of 6 December 1917, Halifax was shaken by a disaster which has since been unparalleled: the collision of two ships in the harbour resulted in a catastrophic explosion that left devastation and death in its wake.

Shortly after the Halifax Explosion, Archibald MacMechan was commissioned to record an official history of the event. He headed the Halifax Disaster Record Office which began gathering facts and stories on 17 December 1917. The resulting report contains a wealth of information on the events leading up to the explosion as well as the aftermath, including individuals’ experiences of the disaster and stories of survivors who tended to others before treating their own wounds.

MacMechan’s document and photos provide key insight into the days immediately following the disaster and how the Halifax citizens coped with the destruction.

The Halifax Disaster Record Office Report on the Halifax Explosion