MI student, Shannon Faires, is a research associate with the Dalhousie Agri-Food Analytics Lab. She is quoted in two recent articles in the National Post and The Star, respectively. Both articles discuss a survey the Lab conducted with Canadians about local food. Excerpts are shared below.

From the National Post (read the full article here)

We may see the value in buying local food, but that doesn’t mean we will open up our wallets: report

“We talk a good talk, but what goes on in grocery stores is very different,” says Sylvain Charlebois, professor of food distribution and policy, and senior director of the AAL.

Their survey of 10,266 Canadians in early October showed that while 79.5 per cent are open to paying more for locally grown produce, only one in four (25 per cent) actively seek it out while grocery shopping. The researchers describe this discrepancy between attitude and behaviour as “the local food paradox.”

“When a lot of people buy food at the grocery store, they’re not looking for where the food was grown. They’re looking for what food is cheapest,” says AAL research associate Shannon Faires. “People may value local food more, and think it’s worth more money, but that doesn’t necessarily mean they’re looking for it.”

From The Star (read the full article here)

Canadians are hungry for locally grown food, but high costs curb our appetite for it, study finds

Four in five Canadians say they’re willing to pay a premium for local food, yet only a quarter of them are making a priority of buying it. So what’s stopping them?

“We’ve been promoting the hell out of local foods across the country,” said Sylvain Charlebois, a Dalhousie professor in food distribution and policy. “So are these programs working? Well, yes and no.”

A new study led by Charlebois for Dalhousie University’s Agri-Food Analytics Lab with research firm Caddle asked 10,266 Canadians about local food: how they define it, whether they would pay extra for it, whether they actively seek it out, and more.

Faires said while people say they’re willing to pay extra for local food even if it’s grown in a controlled environment like a greenhouse, that kind of food is still more expensive because of the high costs involved to grow produce year-round north of the border.

That’s why Faires and Charlebois would like to see more investment in Canadian-grown food year-round to increase the country’s food autonomy — and to decrease the price of local food. 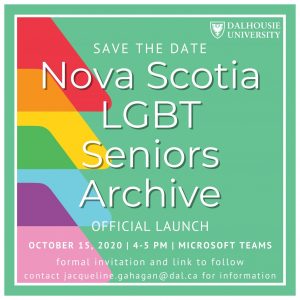 The Nova Scotia LGBT Seniors Archive is a community archive initiative led by Dr. Jacqueline Gahagan and funded by the Nova Scotia Department of Seniors Age-Friendly Communities Grant and Dalhousie University Libraries. The purpose of this archive is to build connections among older LGBT adults and the broader community and aims to raise awareness and appreciation of the various social, economic, and artistic contributions from members of our older LGBT communities across Nova Scotia.

The official launch is scheduled for October 15, 4 – 5 pm. You can find the link to our virtual launch event here. Please contact jgahagan@dal.ca for more details.

This province-wide project will provide a platform to both increase social interaction and community involvement among older populations and will also create a living legacy through the collaborative development of a publicly accessible and searchable archive for use by community members, seniors, older and younger generations of LGBT populations, researchers and students, among others. The Nova Scotia LGBT Seniors Archives works in conjunction with a Community Advisory Committee (CAC), comprised of community members and stakeholders that work with the archives team as volunteers to provide recommendations and vision for the project, connect the archives team with new donors, and assist with collection of materials and oral histories.

The Nova Scotia LGBT Seniors Archive houses a variety of materials from organizations such as Lesbian and Gay Rights Nova Scotia, Gay and Lesbian Association of Nova Scotia, Mister Atlantic Canada Leather, Safe Harbour Church, and Church Members Assembled to Respond to AIDS, among many more.

Happy October! There are lots of reasons to celebrate this month: 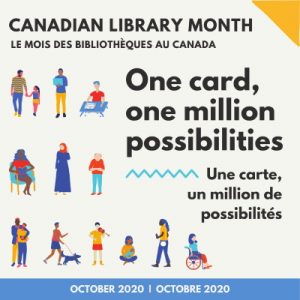 October is Canadian Library Month: Launched in 2006 by the Canadian Library Association (CLA), Canadian Library Month (CLM) provides “an opportunity for Canadians not familiar with their local library to come down and experience all the services available to them.”1 CLM serves as a way to establish new relationships between the libraries and local communities while at the same time developing existing relationships. The 2020 theme is “One card, one million possibilities.” Click here to learn more. 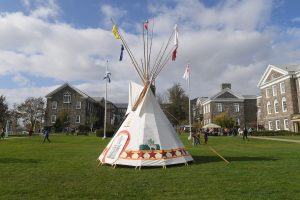 declared October as the official month to recognize and celebrate Mi’kmaw culture and heritage. This time of year, known as Wikewiku’s among the Mi’kmaq, offers all of us an opportunity to recognize and celebrate the historic presence of the Mi’kmaq, the L’nuk, whose unceded territory we live on and who have lived here for over 14,000 years. At Dalhousie, we work, study and live on traditional and unceded Mi’kmaq territory. Click here to learn more.

Please help us to select the next illustrious recipient of this award by reviewing the award guidelines and submitting a nomination to draw our attention to a great colleague.

Awardees may be at almost any career stage as long as their accomplishments to date are a strong fit for the Selection Criteria:

Queries are most welcome.

Sharing knowledge and research could not be more significant during these challenging times in 2020.The 16th annual International Conference on Knowledge Management (ICKM2020) will provide an ideal platform for you to submit research and to share ideas.

ICKM2020 will be held December 3-5 as a virtual meeting, broadcasting from Durham, NC, “the City of Medicine”. The conference theme is “Knowledge Commons” and the institutional analysis of data and the development of knowledge. There will be a panel of journal editors and keynote speakers discussing the “knowledge commons” as well as knowledge cafés and digital booths with exhibitors.

You are invited to submit completed research, on-going scholarship, or product development in the form of a paper, an in-progress report, or a poster for an interactive, digital presentation. Please see attached for the call for papers and presentations.

Recognizing how funding for travel and professional development is being frozen or reduced during the Covid-19 crisis, you may apply for sponsored scholarships.

For detailed information, go to:  www.ICKM.net 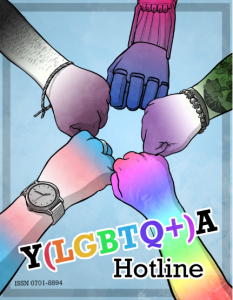 A new issue of the YA Hotline has just been published!  Issue 111: Y(LGBTQ+)A Hotline This issue of the YA Hotline features LGBTQ+ book lists, program guides, reviews, an artist interview, and a glossary of terms. Articles provide critical analysis on topics such as books with happy endings and the evolution of LGBTQ+ character portrayal. Discussions of non-traditional print media, such as video games, fanfiction, and webcomics, are also present in the issue. The authors (Kira Chalupa, Nathan Hynes, Nicole Marcoux, and Ridley Thomas) hope that this issue of YA Hotline provides professional readers with ideas for implementing changes to make materials, programs, and learning environments more welcoming and inclusive for LGBTQ+ teens.

All issues of the YA Hotline are produced by students in INFO 6250 Services and Resources for Young Adults and are freely available at  https://ojs.library.dal.ca/YAHS/issue/archive

SIM is teaming with the Province of Nova Scotia and the Rowe School of Business to host its fourth annual Open Data Contest on March 7th-8th, 2020 in conjunction with International Open Data Day. There will be cash prizes for winning submissions (including a $4000 top prize). This year our Contest is focusing on healthcare and the economy.

Registration is now open! Visit Eventbrite to sign up today. 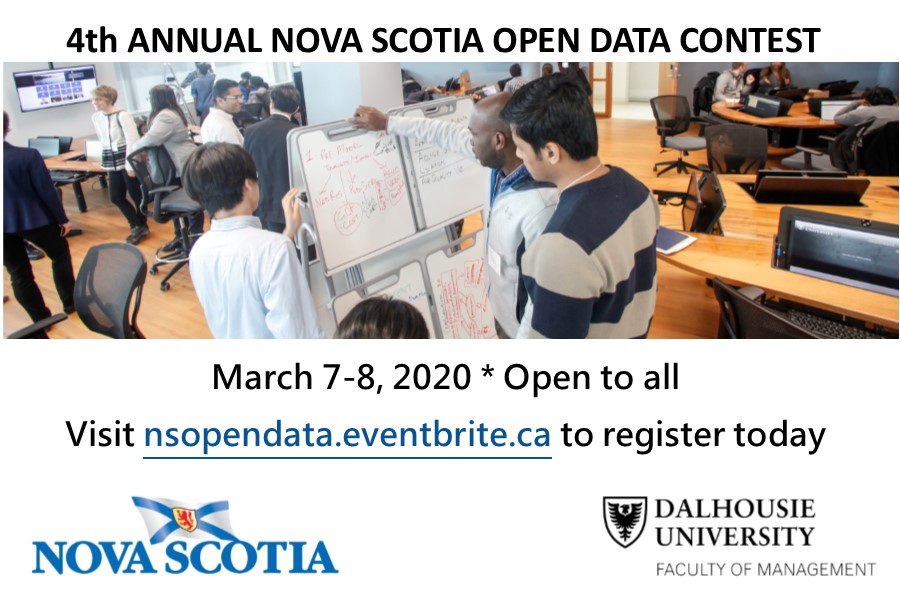 We would like to thank all of you within our SIM, Dalhousie and Information communities for the significant role you played in the accreditation process. As highlighted in the final report from the External Review Panel (ERP):

“The ERP was impressed with the energy and enthusiasm evident among faculty, staff, alumni, employers, and students for the directions in which the MI program is evolving.”

We look forward to celebrating this news together.

Lou Duggan (MLIS ’00) was a great friend to SIM. We encourage all to attend this event in Lou’s memory: 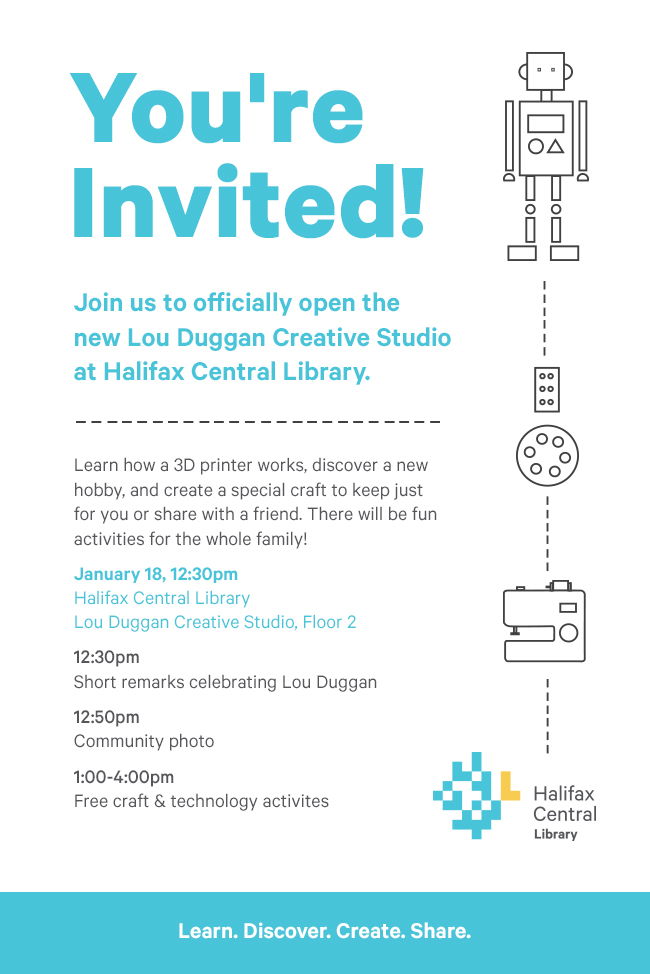