They are part of a national collaborative project to leverage the expertise of Canadian librarians, data managers, and other experts to provide a comprehensive, bilingual, peer-reviewed textbook introducing readers to managing research data. This book will, among other things, serve as a replacement textbook for the MI course INFO 6290: Managing Research Data.

This grant is offered in partnership between the Dalhousie Centre for Learning and Teaching, and Dalhousie Libraries through the support of Dalhousie’s Strategic Initiatives Funding. 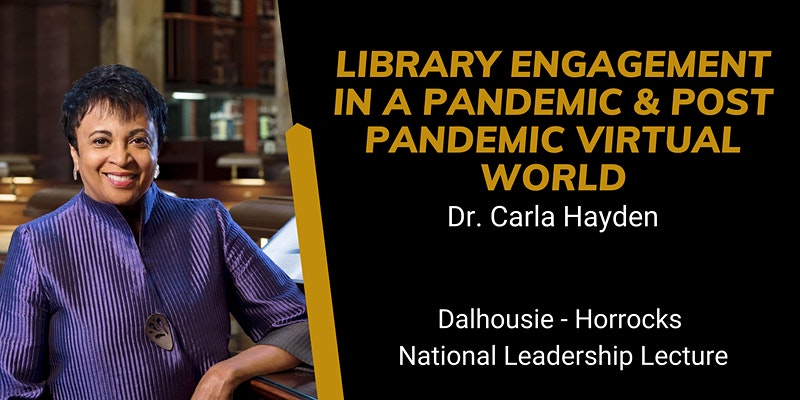 This event is free and open to all.

The School of Information Management is pleased to announce that Master of Information (MI) students Vinson Li and McKenzie Young have been selected as the ninth and tenth recipients (respectively) of the Dalhousie-Horrocks National Leadership Fund.

This Fund was established in 2007 to honour Dr. Norman Horrocks, OC, PhD, FCLIP (1927-2010) for his outstanding leadership in the field of librarianship in North America, Australia, and Europe. Over several decades Dr. Horrocks, former Director of the School of Information Management and Dean of the Faculty of Management at Dalhousie University, pursued a distinguished career of very active involvement in professional associations in the United Kingdom, Cyprus, Australia, the United States, and Canada. His many contributions, for which he received local, national and international recognition, have advanced the field and the careers of countless individuals. The fund supports a scholarship and an associated lecture series through an endowment donated by the many former students, colleagues, friends and admirers of Norman Horrocks. 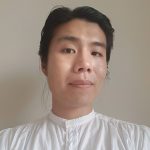 Vinson Li is originally from Toronto, ON and moved to Halifax in fall of 2020. Vinson began a Bachelor of Science degree with a specialty in pharmaceutical chemistry at the University of Toronto. They then transitioned into and graduated with a Doctor of Pharmacy, also at the University of Toronto. Their career working in libraries began working with Hart House Library at the University of Toronto. In 2020, they started their MI degree at Dalhousie University. Currently, Vinson is a reference intern at the W.K. Kellogg Health Sciences Library. They are involved with a scoping review that looks into how undergraduate medical education programs around the world handled the shift to online learning during the COVID-19 pandemic. They also work with Dr. Philippe Mongeon on several projects involving bibliometrics and scholarly communications. One project led to the publication of a conference proceeding about mapping the Canadian library and information science research landscape. Vinson considers helping others to be their top priority. During the summer working at the Kellogg, they remember helping a student refine a search for a review paper over the course of a few weeks. When they are not working or studying, Vinson likes to try out new recipes, garden, or take on a new sewing project despite having three others ongoing. They hope to graduate in summer of 2022 and while they aspire to be an academic librarian, Vinson is willing to keep his mind open to opportunities of all sorts. 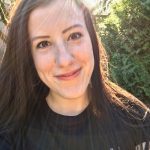 McKenzie Young is a full time MI student currently in her last year of study. Originally from Vancouver, BC, McKenzie graduated from University of British Columbia (UBC) with a Bachelor of Arts in Anthropology and History. In her undergrad, McKenzie worked for a variety of GLAM (Galleries, Libraries, Archives, Museums) institutions including the PoCo Museum and Archives and as a researcher for UBC with many of the local archival repositories. After graduating from UBC, McKenzie worked at the Gathering Place Community Library as well as in federal government records management. In 2020, she moved to Halifax and started at Dalhousie University. Since moving to Halifax, McKenzie has prioritized opportunities to serve the Dalhousie community, both in and out of the MI program. In the MI program, McKenzie joined the School of Information Management Student Association, working to improve the experience of SIM students. In the past year, she has worked at Dalhousie’s Sexton Design & Technology Library as the Reference Intern, helping students with research inquiries. Outside of work and school, McKenzie predictably enjoys reading, but also camping, cooking, and trying to keep her six plants alive. Following graduation, she aspires to continue her work supporting communities at either academic or public libraries.

This award will be presented at the Dalhousie-Horrocks National Leadership Lecture in January 2022. Stay tuned for more details!

Many of our MI students complete internships with Dalhousie Libraries during their studies. Internships are just one of the work-integrated learning opportunities available to students in our program.

Elise Battson, Annalise Benoit, Grace Bourret, Kendell Fitzgerald, Vinson Li, Sam Schwanak, and McKenzie Young all completed internships at Dalhousie Libraries this year. Click on each name to read their profile, and learn more about why they came to the MI program, and what projects they worked on at their respective libraries. Their stories illustrate the breadth of experiences available in our program and the field.

Special thanks to Dalhousie Libraries for their continued support of our students! 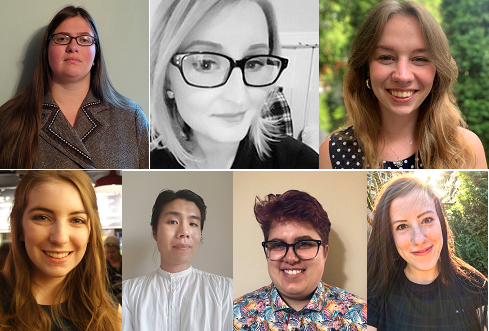 On Monday, May 18th School of Information Management students (MI/MLIS, MIM and GDIM) were awarded their degrees, virtually. Due to Covid-19, a convocation ceremony could not be held, but on June 8th, SIM hosted an online party and awards ceremony to celebrate. Thank you to all who attended and presented! Congratulations to all of our convocation award winners. A full list of award recipients can be found below.

Profiles of our graduates can be read here:

We have 54 students graduating: 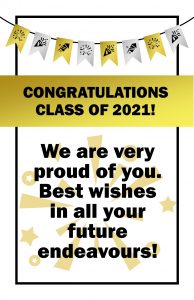 We are happy to share the following recent research accomplishments by SIM faculty/students:

Soon-to-be Master of Information (MI) graduate, Jesse Burgess, shared his recent experience creating an interactive index map to historical aerial photographs for the Halifax Municipal Archives. Originally intended as a summer practicum placement, the opportunity was shifted to a volunteer position in the fall term, due to the pandemic.

The map presents a geographic index to digital images that Jesse described and uploaded into the Archives Database.  The 350 photos centred over Halifax Harbour were done in two surveys, one in 1955, the other in 2001. Jesse geo-referenced the historical photos and created shapefiles that HRM’s GIS Team used to generate the online index map.

“I really enjoyed working on the project, and it meant a lot to be able to see how my home city has grown over time,” said Jesse. “With one set of aerial photographs taken before my time and the other reflecting the period of my childhood, the project allowed me to contrast the areas I am familiar with and their origins. In the summer, I took the Government Information Resources course (INFO 6300) to give myself exposure to the other types of materials which I might encounter at the Archives. While completing the project in the fall, I took SIM’s Archives II (INFO 6860) and Geographic Information Systems (INFO 6681) courses; I considered this alignment to be very fortunate, as it helped bring everything I was learning and working with into sharper focus.”

Where the content of the photographs focused upon different areas within the HRM, finding a means to make them accessible naturally related to considering maps and the flight paths used to create the series. Both series of aerial photographs were managed by working with spreadsheets of associated metadata. Alongside the administrative metadata, Jesse sought out geospatial coordinates (latitude, longitude) of the photo-centres to facilitate mapping the images. Coordinates were obtained by cross-referencing Google Maps data and Natural Resource Canada’s “The Atlas of Canada – Toporama” (https://atlas.gc.ca/toporama/en/index.html) with the centres identified in the photographs. 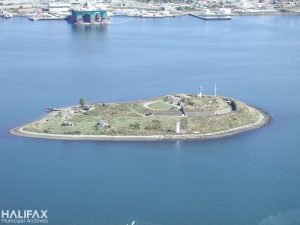 The map was built from an Esri ArcGIS shapefile based upon the geospatial coordinates identified for each image; each point plotted in the shapefile was labeled with the associated reference name and linked with a URL field to the archival holdings. Already the index map has helped users find images to support their research, or just have fun exploring all the changes in Halifax over the past 65 years.

From Municipal Archivist, Susan McClure: “This project was a perfect match of Jesse’s skills and our need to provide better access to these valuable historical images. We were delighted and grateful that despite COVID cancelling the practicum, Jesse was willing to volunteer his time to do the project.  We really appreciate the practicum opportunity to work with SIM students; it is rewarding to see them apply their classroom learning and complete needed projects for the Archives.  First-year student Jordan Audas just finished his practicum with us, and we now have some great new descriptions, digitized material and social media posts available to the public.”

“Having the opportunity to explore those time periods using the skills developed in the MI program really solidified my joint interests in archives and data management,” says Jesse. “The staff at the Halifax Municipal Archives were supportive not only of my work on the project, but of my understanding of broader archival principles and how municipal records are managed; it was an opportunity for which I am immensely grateful.”

Check out Jesse’s work here: https://www.halifax.ca/about-halifax/municipal-archives/exhibits/historical-aerial-photos.  The Archives plans to add more aerial photos to Jesse’s map, so let them know if you want to practice your GIS skills! 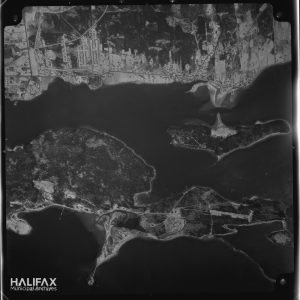 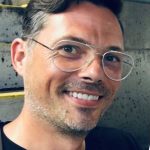 The Student Excellence Advancing Evaluation Knowledge (SEEK) competition is open to all students in a course in program evaluation in Canada. The Award is intended to “recognize exemplar and diverse student contributions to the advancement of evaluation theory and/or practice” (source). Jason won for his paper entitled “Inclusion and Diversity in Evaluation Design” (MGMT 5006: Program Evaluation).

MGMT 5006 instructor Kaireen Chaytor says: “It was wonderful having Jason as a student of evaluation. He was especially interested in evaluation theory and how theory can be applied. In his paper he demonstrated how, for instance,  the work on responsive evaluation could be used to gather diverse voices to advise on decision making. He notes the critical role of empathy in evaluation practice and outlines strategies for the evaluator to engage culturally responsive evaluation. I really like one of his points in his call for action which states: ‘The field of evaluation is well poised to lead organizations in making inclusion more than a checkbox through existing and widely accepted and practiced methods of evaluation design and implementation.’ He deserves this win.”

Group assignments can help students develop the soft skills valued by employers, such as creativity, collaboration, and communication skills. However, many students and instructors find group assignments to be frustrating and difficult to manage.

It doesn’t have to be this way! Join us for an interactive discussion about designing and facilitating meaningful (and maybe even enjoyable) group work that fosters creativity and learning.

After a brief presentation outlining research-based recommendations, we will work in groups to discuss a sample assignment. We will then invite attendees to share their own experiences with group assignments that were successful, failed, or were somewhere in between. Please bring examples of group assignments you’ve used or are considering using to help stimulate our discussion.

Registration closes Wednesday, April 21, 2021 at 10:40 a.m. Atlantic.  A link to the Collaborate Ultra site will be sent at least 1-hour prior to the event.  If you did you not receive the link, or wish to register once it’s closed, please email clt@dal.ca.

Sadly, SIM has learned of the passing of Emma Collins (MLIS student 2006-2010) on 5 December 2020 and extends sincere condolences to her family and friends.

A notice from the family can be viewed here. 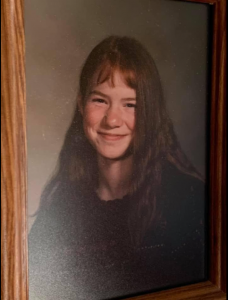