SIM joins the many colleagues and connections of Marie DeYoung across the country in mourning the loss of an exceptional librarian and friend. Marie endlessly supported SIM and our students, and among her many honours she was awarded the SIMAA Outstanding Alumni award. We feel fortunate to have had her in our community, and are celebrating her life well lived with all of you.

From the obituary (click here to read in full): 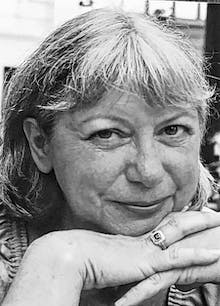 Marie Elizabeth DeYoung hung out a perfect line of clothes a week before she died. “That’s my last line,” she said as her sheets dried in the wind and sun just as they were supposed to do. A day later, Marie spent the last day in her Halifax home putting her documents into folders – one for legal documents, one for subscriptions, one for appliance manuals, one for bank and credit card accounts. A librarian by vocation and by disposition, she saw putting files in the right folders as a first principle. A principle with a purpose. Get yourself organized, and you might just put the precious time you have on earth to good use. Marie did just that. In her last year of life, after major surgery, Marie seized the day by taking one final trip to Europe. She always flew business class, stayed in good hotels, dined well and came home after a few days to her spotless home on a leafy Halifax street to watch Jeopardy on her ancient cathode ray TV. Earlier in the day, pre-Jeopardy, Marie would tune her stereo to CBC Radio to listen to classical music while she read a book. A glass of fresh water was left on an end table for Alice, her cat. A half dozen or so novels, borrowed from the Halifax Public Library, were stacked neatly on the coffee table.

Marie worked in libraries for most of her career, though she never called it work. Managing information, cataloguing books, guiding students through the stacks and through life – these were all part of the vocation she loved. Her distinguished career was also reflective of that passion. After completing her Master of Library Service degree at Dalhousie University in 1980, Marie managed libraries at the Nova Scotia Departments of Justice and Labour before taking senior positions at the Nova Scotia Community College and finally Saint Mary’s University, where she served as University Librarian for ten years before retiring in 2018.

A private celebration of Marie’s life will be held at a later date. Donations can be made to a charity of your choice. Marie’s favourites included the World Wildlife Fund and Bide Awhile animal shelter.