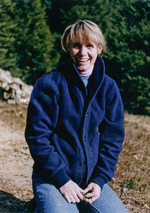 Photo from obituary linked above

SIM is sad to share that MLIS alum Bonnie Waddell has passed away. Bonnie graduated from the Master of Library & Information Studies (MLIS) program in 1973 and was the former University Librarian at Nova Scotia Agricultural College. Our thoughts are with Bonnie’s loved ones at this time.

From the obituary, which can be read in full here:

Bonnie has strummed the last song on her ukulele and read the last page in her book. Born in Rhode Island, Bonnie was a daughter of the late Dr. William and Barbara (Christie) Waddell. She grew up in Boston and Denver. She graduated from Colorado State University and then took a job in a library because she wouldn’t have to pay late fees as a staff member. Moving to Nova Scotia where she had family roots, she obtained her Masters in Library Science from Dalhousie University. Upon graduation, she worked at South Shore Regional Library, Colchester East Hants Public Library and finally, as chief librarian at the Nova Scotia Agricultural College. While there, she was involved in library projects in Africa and South America. She was the Canadian representative on an international library board in Washington, DC.