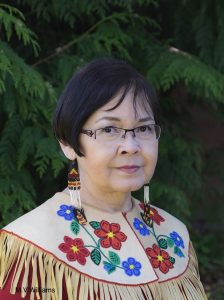 Reflections of a First Nations librarian from the 1970s to the present (Dr. Gene Anne Joseph)

RSVP’s are required. Click here to register via Eventbrite.

Abstract: Reflections of a First Nations librarian from the 1970s to the present. In this nearly fifty year period Dr. Gene Joseph (Hon.) has implemented a number of seminal approaches to library and archives services for First Nations communities. Her primary work has centred upon research and litigation support for Aboriginal Title and Rights. While advocating for establishment and improvement of library services to First Nations she has worked with many non-Indigenous librarians on a number of initiatives which have improved library services and increased the number of Indigenous librarians. As Gene says, “A number of improvements, changes and then again not much movement on some very important areas of our profession.” There is still a lot of work needed!

Bio: Dr. Gene Anne Joseph (Hon.) is of Wet’suwet’en and Nadleh Whut’en ancestry and was the first Indigenous librarian in British Columbia to receive her Masters of Library Science Degree (1982). As a professional librarian she has specialized in First Nations Aboriginal Title and Rights litigation; as well as in establishing First Nations libraries and archival collections.

Joseph’s seminal work on the court case Delgamuukw v. British Columbia (1997) contributed to substantial improvements in the recognition of Aboriginal Rights and Title in British Columbia and Canada. Gene was the founding librarian of the X̱wi7x̱wa Library at the University of British Columbia, the only post secondary institution in Canada with an Indigenous library. In 1996 The University of British Columbia School of Library Archival and Information Studies recognized Gene’s work with a Distinguished Alumni award for “outstanding contributions to Library and Information Services in Canada.” In 2015 Gene retired from White Raven Law where she worked for many years as a senior research and litigation support advisor on Haida aboriginal title. In 2018 Gene was honoured by the Vancouver Island University with an Honorary Doctor of Law. Joseph’s leadership and innovation continues to provide a foundation for future generations of First Nations librarians, libraries, archives and cultural centres.

Following Dr. Joseph’s lecture, the Dalhousie-Horrocks National Leadership Fund will be presented to MI student, Siobhan Wiggans. This Fund was established in 2007 to honour Dr. Norman Horrocks, OC, PhD, FCLIP (1927-2010) for his outstanding leadership in the field of librarianship in North America, Australia, and Europe. Over several decades Dr. Horrocks, former Director of the School of Information Management and Dean of the Faculty of Management at Dalhousie University, pursued a distinguished career of very active involvement in professional associations in the United Kingdom, Cyprus, Australia, the United States, and Canada. His many contributions, for which he received local, national and international recognition, have advanced the field and the careers of countless individuals. The fund supports a scholarship and an associated lecture series through an endowment donated by the many former students, colleagues, friends and admirers of Norman Horrocks.