I am a second-year student in Dalhousie’s Masters in Library and Information Studies (MLIS/MI) program as well as working as a Dalhousie Libraries student intern in the Archives. This semester I have been working through a self-directed reading course based around the subject of digitization in archives under the supervision of Michael Moosberger, the Associate University Librarian Archives, Special Collections and Records Management; and University Archivist.

As part of my course, I have been working on the digitization of a selection of First World War material. I chose to work with these records because the subject is one that is of great interest to me as well as an area I have spent much time studying, dating back to my final year of my undergraduate degree in history, writing my honours thesis at Cape Breton University and working in the CBU’s Beaton Institute.

Since I began studying the First World War it has become a great passion of mine. I saw my reading course not only as an opportunity to practice digitization and become more familiar with the functions of an archives but also as a way to increase access to the Dalhousie Archives’ First World War records by making them digitally available through their online catalogue, AtoM.

Digitization has become a common feature of archives in today’s world. Digitization is the process of creating digital copies of analog records with the end goal of making them more widely available online. Through this process, archives are able to greatly increase the breadth of access for their holdings. 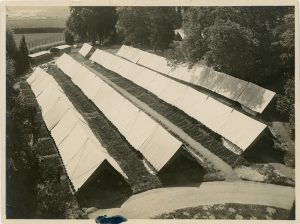 A tent hospital in Argues, France with officers tents in the background through the trees.

The work that I have done this semester has included digitizing a selection of First World War records, filling in holes of collections that had files that had not yet been digitized. In this manner, I conducted a review and scanned through the archives’ holdings of First World War records, looking for material that did not have any digital objects attached to them already. This provided me with a starting point for selecting material to digitize, to ensure I was not duplicating work that had already been done. What I ended up with was a selection of material from different collections that had not been digitized.

A number of digitized items have come from the Samuel Balcom fonds that contained photos of soldiers at Stormcliff, England (1914), tenting encampments at Argues, France, German prisoners of war in Argues, photos of Captain James A. Murray and Batman (not the Caped Crusader) and other papers relating to the Dalhousie  No. 7 Overseas Stationary Hospital, which was started in the fall of 1915 in response to a need for qualified medical personnel. Additionally, I digitized other items from smaller collections including notes relating to the young Soviet revolutionary Leon Trotsky who was imprisoned in an Amherst internment camp in 1917; photographs of military personnel Oscar Donovan and Laura Hubley, as well as a message written in French from French Marshall Philip Pétain, addressed to Oscar Donovan, a Nova Scotian who served as a lieutenant with the Canadian Army Medical Corps during the First World War, relating to his service during the war. 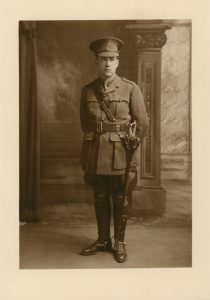 Oscar Donovan, a Nova Scotian who served as a lieutenant with the Canadian Army Medical Corps.

The Dalhousie University Archives is home to many amazing archival records that document the University’s and Canada’s involvement in the First World War. First, Samuel Balcom fonds (MS-2-128). Balcom was a well-known Halifax businessman and politician who established the MacLeod-Balcom Ltd. (later Balcom-Chittick Ltd.) retail and wholesale business as well as serving in both world wars. During the First World War, he served with the Dalhousie University Medical Unit and in the Second World War, he served as Officer Commanding, Medical Stores (1942-43) as well as the Chief Medical Stores Inspection Officer (1944-45).

Another excellent collection is the Robert A. Logan fonds (MS-2-580). Contained in this collection are documents relating to his studies of language, his time as a German prisoner of war during the First World War as well as his publications among other records. Logan served with the Royal British Flying Corps and was later shot down in an aerial attack led by the notorious Baron von Richtofen, the “Red Baron.” Logan survived being shot down (and the war) but was captured and taken as a prisoner of war by the Germans.

During this month of remembrance for Canada’s military, take a moment to remember the brave men and women that have fought and died for our country. Take some time to reflect on the importance of this history and visit an archive like the Dalhousie University Archives to explore some of this rich archival material. Records of this nature can give amazing insights into what the First World War was like, to see into the lives of the men and women who served so long ago.