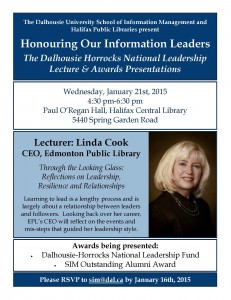 Please join us for this exciting event!

Prior to being appointed the Chief Executive Officer of the Edmonton Public Library System, Linda served as Director of the Yellowhead Regional Library System, reporting to a 20 member Board of Directors. She was responsible for directing the overall operation, which included 155 public and school libraries serving a population of 165,000.

In her current capacity as CEO of Edmonton Public Library, she is responsible for one of the busiest systems in Canada, with 19 branches, a staff complement in excess of 600 people, and a budget of $52 million. In addition, Linda has lectured since 1992 as an Adjunct Professor for the Faculty of Education, School of Library and Information Studies where she taught the senior management course. She was recently appointed as an Adjunct Associate Professor.