The Information Management Public Lectures give attention to exciting advances in research and professional practice. The topics are diverse reflecting the importance and global extent of Information Management in today’s society. The lectures are open to all members of the Dalhousie campus and surrounding community. When feasible, recordings of the lectures are posted here for wider circulation. For the full schedule, visit the Public Lecture page of our website. 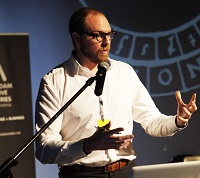 A Rational Economy? From Bitcoin to Ubiquitous Cryptography

Listen to the presentation here.

Abstract
Bitcoin and its derivatives are here to stay. Collectively known as “cryptocurrencies” these technologies are powerful because they rely on encrypted code systems. Since the 1990s, cypherpunks have lauded the development of cryptography as a guard against snooping and overreaching governments. Activist organizations such as Wikileaks have benefited from unstoppable, uncrackable, and decentralized funding through Bitcoin. Speaking to the promise of cryptography more generally, Wikileaks leader Julian Assange says that the “universe believes in cryptography.” Yet, with money to be made, capitalists have also become interested in this secure, more “rational” economy. Among others, the Winklevoss twins—one-time Facebook associates—have developed lucrative investment strategies for Bitcoin.

This motley crew have an unrecognized, common goal. In this talk I will argue that cryptocurrencies and their offshoots are a potent form of economic and social rationalization. Nearly a hundred years ago Max Weber foreshadowed today’s reality; writing about modern rationalization he argued that “one can, in principle, master all things by calculation.” The calculating machines that Weber thought would rationalize all they touched often don’t calculate in the usual, mathematical sense. Rather, as French philosopher Bernard Stiegler has argued, rationalization is a kind of coding which has been through two previous waves: first the invention of writing, and then movable type.

As many scholars have admitted, we are entering a third wave of rationalization made possible by powerful computers and information devices. For example, in the economy, we see automated and “high-frequency trading” generate trillions, or lose it all through automatic “flash crashes.” And, over a decade ago, Harvard law professor Lawrence Lessig argued that our legal rights are at risk of becoming irrelevant, since software code blocks activities (such as file sharing) before our legal rights even come into play (dubbed “code is law”). I will argue that cryptography may end up being one of the most potent and stealthy forms of rationalization. With calls from all sides for “ubiquitous cryptography,” and the development of emerging tools such as the crypto-legal framework Ethereum (developed from Bitcoin’s cryptographic technologies), Lessig’s observation that “code is law” requires an update. Ubiquitous cryptography promises unbreakable and opaque rationalization; at the dawn of a new wave of rationalization our formula is no longer the crystal clarity of “code is law,” but rather 04b34dc49dfb224a10d832b14d593075.

Quinn DuPont studies the intersections of code, new media, philosophy, and history, with particular attention to the role of cryptography in contemporary life. Using the approaches and methodologies of critical code studies, software studies, digital humanities, and new media studies, Quinn has published on a wide range of issues. Previously, he worked at an enterprise risk management software development firm. Further information about Quinn is available at iqdupont.com