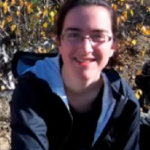 Valerie Collins, a returning MLIS student, is the recipient of the 2014 Stephanie Downs Memorial Award.

When Stephanie Downs returned to Canada from the UK to become a librarian, she chose to enter the MLIS program at Dalhousie for its sense of community, welcoming faculty and Maritime culture. Diagnosed with cervical cancer at the end of her last year at SIM, Stephanie graduated with her MLIS but lost her hard-fought battle to her illness on May 27th, 2007.

Remembered for her enthusiasm, Stephanie was a “doer” and very active in school life, serving as 2005-2006 Co-Chair of SIMSA and SIM Team Captain for the 2005 Halifax “Run for the Cure”. She was also awarded the Student-to-CLA travel award to attend the 2005 CLA Conference in Calgary. This award was established by Stephanie’s family and friends in her memory.

Valerie Collins was raised in Alaska, and studied at the University of Alaska Fairbanks, where she completed a double major in English and German. As part of her German degree, she studied abroad for a semester in Mannheim, Germany. This was her first extended experience abroad, and it was eye-opening, especially when she realized that the academic libraries in Mannheim were using an entirely different classification system than the Library of Congress. This discovery sparked her interest in cataloguing, and methods of classifying books and other media.

After returning from Germany and completing her degree in Alaska, she decided to combine her interest in academic librarianship into another international experience. She came to Dalhousie for her MLIS degree.

Valerie serves in a number of capacities in the MLIS program. She is an executive member of both the Special Libraries Association (SLA) student chapter at Dalhousie and the School of Information Management Student Association (SIMSA). She also represents her peers as a member of the MLIS Curriculum Committee.

Valerie will continue to deepen her understanding of academic libraries and some of the challenges they face in an increasingly digital environment by working as a reference intern at the Killam Library for the coming year. Valerie also looks forward to facilitating the international student experience in the School of Information Management (SIM) and in the Faculty of Management.