Pullen Map Collection (MS-2-756) – This collections contains fourteen historical maps and charts of Eastern Canada and one illustration, produced by cartographers such as Thomas Jeffreys and Jacques-Nicolas Bellin. Nine of the fifteen items have been digitized.

Edward J. Mullaly Map Collection (MS-2-46) – This collection contains twelve historical maps of Eastern Canada, produced by cartographers such as Giovanni Battista Ramusio and Girolamo Ruscelli. Mullaly’s donation also included copies of Kershaw’s “Early Printed Maps of Canada” and “A Monograph of the Evolution of the Boundaries of the Province of New Brunswick” by William F. Ganong. Both volumes were transferred to the Killam Library Special Collections. All twelve maps in this collection have been digitized.

David and Marilyn Janigan Map Collection (2011-006) – This collection contains eighteen historical maps of the Eastern Seaboard and Nova Scotia municipalities, produced by cartographers such as Jacques-Nicolas Bellin and Giacomo Gastaldi. The donation was highlighted in the Dalhousie Magazine (Volume 28, Number 1, Spring 2011). Eight maps have been digitized. 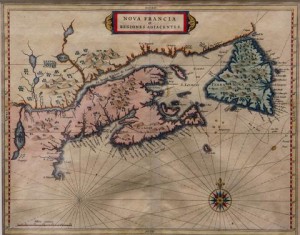 You can read more about our historical maps on the Archives’ website.