The Royal Canadian Geographic Society (RCGS) has announced it is presenting the 2012 Literacy Award to the director of the GISciences Centre, James Boxall. 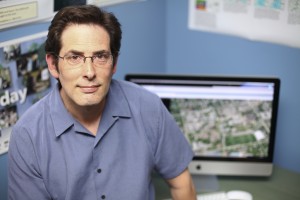 James Boxall, director of the GISciences Centre, located in the Killam Library.

The award will be given at the RCGS fellows dinner on November 7 in Ottawa. The award includes $5,000; half of which is donated to a charity of choice. James has expressed a desire to create a foundation to support K-12 teachers who wish to train in using geographic information systems (GIS) with their students.

James is the recipient of this award due to his work over the last 25 years to support and enhance geographic and spatial education at all levels. From 1991 to 1993, James was the original proponent in developing the Canadian Council for Geographic Education and has been actively working with not only our own Dalhousie community, in geography and GIS courses and through the development of the GISciences Centre, but also in the K-12 sector with teachers and schools wanting to develop skills in spatial learning.

When asked about the connection of this to Dalhousie and the Dal Libraries, James remarked, “Those who know the history of geography at Dalhousie know that much of the work that happened outside of our community ended up playing a role in moving things along on campus. Also, it makes sense because with the work we do in teaching and research, you simply have to look back at the foundation of the discipline—in 200BCE the chief librarian of the Great Library of Alexandria, Eratosthenes, founded the field of geography, developed latitude and longitude, and accurately measured the circumference of the Earth. We are simply trying to keep up with that tradition of geography librarians enhancing spatial learning.”

Congratulations on this honour James, from everyone at the Dalhousie Libraries.