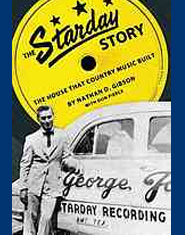 Published in 2011, The Starday Story: The House That Country Music Built is the first book entirely dedicated to one of the most influential music labels of the twentieth century.

In addition to creating the largest bluegrass catalogue throughout the 1950s and ’60s, Starday was also known for its legendary rockabilly catalogue, an extensive Texas honky-tonk outpouring, classic gospel and sacred recordings, and as a Nashville independent powerhouse studio and label. Written with label president and co-founder Don Pierce, this book traces the label’s origins in 1953 through the 1968 Starday-King merger. Get it at Dal!