How (and why) does a wasp make this caterpillar starve to death?

Thus far I’ve written about a range of topics I find interesting, but my personal research is on the parasitic manipulation of behaviour. Some parasites manipulate the behaviour of their host for their own reproductive and survival benefit, often in dramatic and specific ways. How any of these can hijack the brain and nervous systems of their hosts remains largely unknown, but they appear to use mechanisms previously unknown to neuroscientists. I was personally drawn to this research because I sensed that uncovering these mechanisms of manipulation could meaningfully improve our understanding of the relationship between the brain, nervous system, and behaviour.

One of the best characterized parasitic manipulators fortunately happens to be the one I study, the parasitoid wasp Cotesia congregata (and I like wasps, in case you couldn’t tell). The adult wasps lay their eggs (along with venom and a virus) into the body of the tobacco hornworm caterpillar, Manduca sexta, where they hatch and grow. During this larval stage for the wasps, the caterpillar’s behaviour remains largely unaffected.

Once the larvae complete this stage of development and are ready to become adults, they emerge from the caterpillar (which survives this whole ordeal, as it’s significantly larger than the wasps), then spin cocoons anchored to the caterpillar’s body. 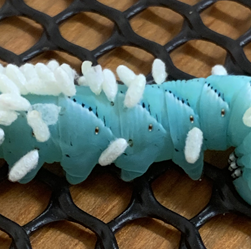 Wasps freshly emerged from a caterpillar (photo by Dylan Miller).

A few days later, the adult wasps emerge from the cocoons and fly off to find a caterpillar and continue the cycle.

The wasps are quite vulnerable while they undergo metamorphosis inside cocoons. They’re susceptible to predators, yes, but as if by karma, the greater threat is other parasitoid wasps, for even wasps are not free from their own evils. This is part of why they leave the caterpillar alive, so it may serve as a ‘bodyguard’ for them – that and because developing while anchored to a corpse tends to be unsanitary and lead to infections. They don’t directly induce this bodyguard behaviour, though, rather they increase the sensitivity of the caterpillar to touch. Then they can rely on its natural tendency to perceive things flying around it or things landing on it as potential threats – some of them could even be wasps trying to lay eggs, and this caterpillar won’t stand for it! While this is useful to the wasps and fascinating, it isn’t the most dramatic change the caterpillars undergo.

When the wasps emerge from the caterpillar, the caterpillar stays alive, but utterly and permanently stops eating. It won’t even try to eat if you put food in front of it, having lost all motivation to feed. This is a drastic change for most any animal, but caterpillars are essentially walking stomachs, as the point of that life stage is to eat as much as possible, storing energy for the adult stage, but the wasps just…turn it off.

Why would they do this? As mentioned before, the wasps need an alive and (relatively) healthy caterpillar to protect them, making this change seem counterintuitive given that food would likely help. Truly though, the wasps only need them for 3-5 days before they fly off as adults, and by the time the caterpillar stops eating it has built up enough fat to last a week (or longer!) without any food. Feeding is turned off to prevent the live, mobile caterpillar itself from threatening the wasps. If the caterpillar had its feeding motivation intact, it would readily eat the developing cocoons off its back. We know this because if you attach cocoons to healthy, unparasitized caterpillars, they do exactly this, and almost seem to prefer eating them over other food.

So, you may be wondering – how do the wasps permanently and utterly turn off this behaviour, one which seems so central to the caterpillar? Well…that’s an excellent question, and my research is (hopefully) moving us closer to an answer. As I’ve written about before, wasps have a veritable arsenal of tools for controlling almost all aspects of their host’s physiology, and many of these could conceivably be the culprit (though it’s likely some combination of them). This is part of what makes the research a challenge, but also so exciting – there’s so much to discover just in this one, ‘simple’ insect relationship with regards to brain and behaviour connections. Discovering the novel mechanisms of this ‘simple’ system’s extreme behaviour manipulation could give us tools for new ways of studying behaviour in the lab and teach us core principles to understand more complex changes and systems.