Meet LadyBerry: The little ladybug that lived (and became an unlikely TikTok star)

Given the macabre (some might even say evil) nature of my research topics, I’ve long said that I hope my work is never relevant to the news. That hope has been in vain, but in the best way possible. A lovely TikTok about a behaviour manipulating wasp (well, mostly about its host) recently grabbed many people’s attention. (The original TikTok is no longer available, but this video on The Dodo summarizes the whole saga). The TikTok user, Tiamia10987 (Tiana), finds a ladybug with its body wrapped around a cocoon on a leaf. The ladybug (named LadyBerry) was host to a wasp which had already emerged and formed a cocoon, but the ladybug’s part was not finished yet.

Firstly though, how’d a wasp cocoon end up in a ladybug bear hug? Ladybug shells may as well be made of steel for how impenetrable they are to other insects – stinging right through it isn’t an option, and it covers much of their body. To get around this, the adults of the wasp (likely Dinocampus coccinellae) have a flexible abdomen (their last body segment) which, when combined with a slightly curved ovipositor (stinger). This allows them to angle their sting, reaching under the ladybug to lay eggs into its more vulnerable underside. 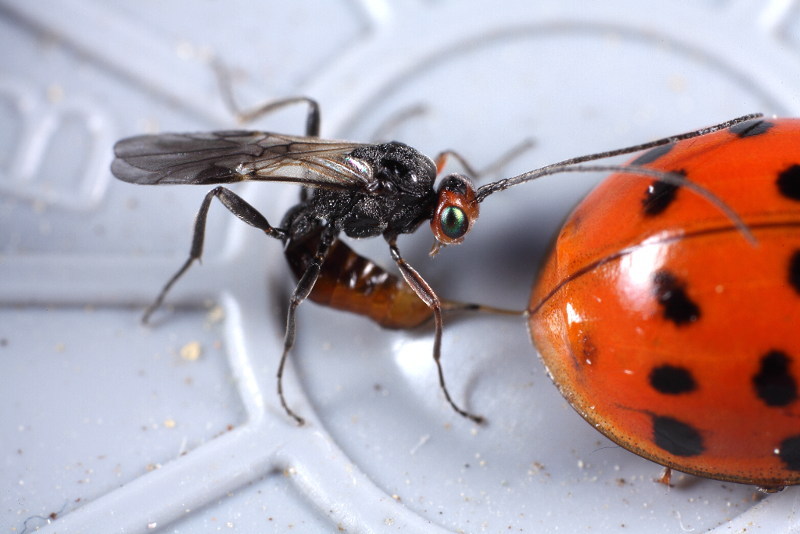 As with other parasitic wasps, it injects venom, an egg, and a virus. The wasp larva hatches and as it grows, it consumes the ladybug’s fat reserves and its reproductive organs, leaving intact those organs critical for survival. Once the wasp has grown enough, it emerges from the ladybug and its virus – lain dormant in the ladybug’s nervous system cells – is activated. The wasp quickly spins its cocoon between the ladybug’s legs, with not a hint of protest from the ladybug. Rather, the virus induces the ladybug to wrap its legs around the cocoon, then essentially paralyzes it, forming an immobile, thick barrier against threats, with bright red warning coloration to boot. The wasp needs the ladybug to remain alive, though, as having a corpse wrapped around the cocoon wouldn’t be conducive to its survival – hence the sparing of most of the ladybug’s organs.

This is where Tiana found LadyBerry and its wasp charge – the ladybug near unmoving as it protectively wrapped itself around a wasp cocoon, an unwilling bodyguard. Using a toothpick, she carefully separated the ladybug from the wasp cocoon, where the ladybug resumed its paralyzed gripping on the toothpick instead. It should be noted that that while the rest of the video focuses on the ladybug, she did keep the wasp cocoon around too, but unfortunately no adult emerged from it. This likely had nothing to do with Tiana’s actions – the ladybug’s presence is just to protect the cocoon from predators (and other parasitic wasps), neither of which are likely a threat in a human home. What is truly fascinating about this story is the ladybug host’s recovery afterwards. Tiana nursed it back to health, keeping it fed, hydrated, and safe enough that after a few days it was able to shake off its paralysis, eventually returning to full mobility and independent functioning. Even amongst the hundreds of thousands of parasitic wasp species, this is so uncommon that when a friend said this was about their host recovering, I guessed it would be the ladybug.

From what I’ve described here and what wasps overall put their hosts through, the idea of surviving this ordeal, let alone a (mostly) full recovery, seems unthinkable. Last month I even said that usually a parasitoid infection results in a host’s death, and that ‘usually’ is amplified when it comes to wasps. Technically, what a parasitoid does is remove its host from the gene pool – usually via death, but sometimes it keeps the host alive and prevents it from reproducing anymore. In this case, the wasp is a parasitoid because of its aforementioned consumption of ladybug reproductive organs – plenty of material that the ladybug doesn’t require for immediate survival or protecting the wasp.

Despite LadyBerry suffering from a wasp’s full arsenal of misery, including behaviour manipulation at the genetic level, they had someone looking out for them – a new friend and rescuer, in the form of Tiana. Maybe if Darwin had known someone like Tiana, his feelings on the wasps’ consequences for morality wouldn’t have been as dire.