On the possibility of an active ‘design’ behind evolution, Darwin said “I cannot persuade myself that a beneficent & omnipotent God would have designedly created the Ichneumonidæ [parasitic wasps] with the express intention of their feeding within the living bodies of caterpillars…”

Wasps are insects in the same order as ants and bees, and an organism is considered parasitic if its survival, reproduction, or both depend on and harm another specific organism (their host). Often parasites live in or on a host for most of their life, and that’s part of what makes them distinct from predators. Wasps are in a group called ‘parasitoids’, which prevent their hosts from reproducing, usually via its death, as opposed to ‘true parasites’ which allow reproduction while keeping the host alive.

Parasitism offloads the difficult tasks of survival and reproduction onto another organism, and it’s such an effective strategy that ~50% of animal species are parasitic. Parasitoid wasps alone are one of the most diverse animal groups at hundreds of thousands of species, while all birds and mammals combined are an estimated 30 thousand.

These wasps lay eggs in their host (another insect or spider) via their ‘stinger’, a modified ovipositor (egg-depositor), usually flying off to another host right after. The eggs hatch into larvae, grow by feeding on their host’s blood, then emerge-often after eating the host’s organs in reverse order of necessity, keeping it alive as long as possible. 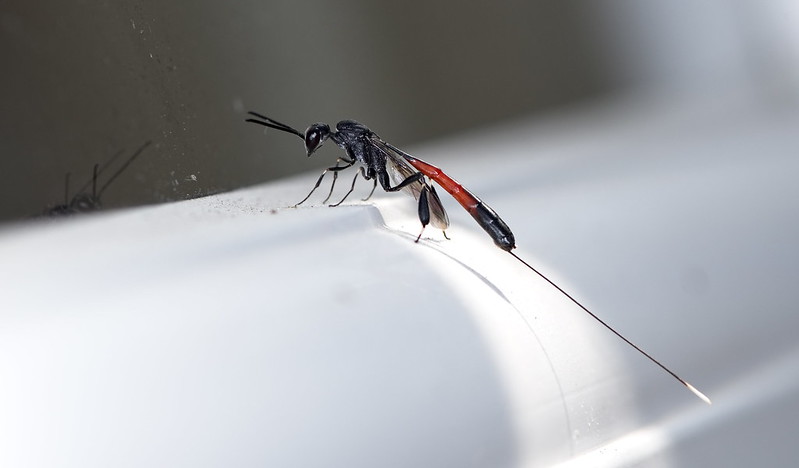 Some wasps have…dramatic ovipositors, to say the least

Eggs aren’t the only part of the wasp’s injection cocktail though – they also put venom and a virus into their hosts.

Their venom, a mix of proteins and other small molecules, typically has its effects first. Usually it paralyzes and/or numbs the host – eggs take a few seconds to lay, more than enough time for an unimpeded caterpillar, beetle, or spider to deal with the wasp. The venom can have longer term effects too, altering the host’s development, metabolism, and even behaviour. These are targeted and specific alterations to make the host more suitable for its role – for example, venom can alter the host’s metabolism to make more of something the wasp larvae can’t make itself.

Viruses as a tool – wasps did it first

Parasitic wasps likely captured a virus long ago and bent this, too, towards their survival. Now the virus (called a polydnavirus) can only reproduce within a female wasp before making its way into the injection cocktail, then on into the host where it benefits the wasp, but no longer reproduces. It temporarily suppresses the host’s immune system – not long enough to kill it (the larvae need the host, after all) but enough time for the larvae to develop their own immune system countermeasures. There’s evidence that the viruses have additional long-term effects (last month I discussed a virus that manipulates behaviour) and its genes can remain active in host cells long after the immune effects. To reiterate: wasps long ago mastered a virus to manipulate the genes and physiology of their host, and one that self-terminates, techniques we are still developing for research and medicine.

Eggs (with a surprise inside!)

Lastly come the wasp’s eggs and, by extension, their larvae – the whole reason for this array of manipulation. Parasitic wasps are nothing if not efficient (some even get rid of useless things like genes or their head to save on resources), and even the eggs serve multiple purposes. Once the larvae have hatched, the egg casing unleashes unique and giant cells into the host’s blood called ‘teratocytes’. These steadily pump out compounds (e.g., hormones, other signaling molecules) to continue reconfiguring the host’s biology and behaviour for the parasites, like compounds to give targeted support for the polydnavirus-suppressed immune system. After all, the larvae still need it alive (for now). The larvae too output secretions into the host’s blood, giving a more persistent and responsive level of control, and often enabled by the other injected components. Some wasps eliminate and subsume their host’s own developmental control, with the parasites releasing compounds to control the host’s growth, timing it to give the wasps proper time to develop, and preventing changes that could risk harm to them.

To me. this legion of tools for the wasps to command their host’s physiology is all just a part of what makes parasitic wasps so truly fascinating, beautiful, and terrible. Where Darwin looked upon these wasps and saw an endless abyss, void of beneficence, I was instead immediately enthralled and became desperate to learn more.

To answer the question most have when they hear wasps lay eggs by stinging – although most wasps are parasitic, with a few exceptions the ones that are laying eggs this way don’t sting us. They’re imposing a lot of labor onto their host, but a lot of resources (the legion mentioned above) go into their egg laying, and it would be a waste of all that to put it into something nonviable.