Brains abhor expending resources to maintain anything they find isn’t ‘needed’ anymore. The components of neurons (the main signalling cells in the brain) don’t last forever and require regular upkeep. Keeping every part of these cells in shape takes a lot of energy, biological materials, and space. All of this places limits on how many neurons there are and how big they can be, especially inside the limited space of most animals’ heads. It’s thought this is part of why most people forget things over time – if a memory isn’t being used often, its physical storage (the cell) is deemed unnecessary and recycled.

Nowhere is the neuron’s scavenging for limited resources better demonstrated than in the brains of an implausibly small insect.

The thrip Heliothrips haemorrhoidalis is a 1-2-millimeter-long common plant pest, a ‘miniaturized’ insect and lays even smaller eggs. That’s pretty tiny, but still a giant compared to the insect we’re really here to talk about. As it turns out, these eggs are themselves hosts for an even smaller insect – the parasitic wasp Megaphragma mymaripenne. 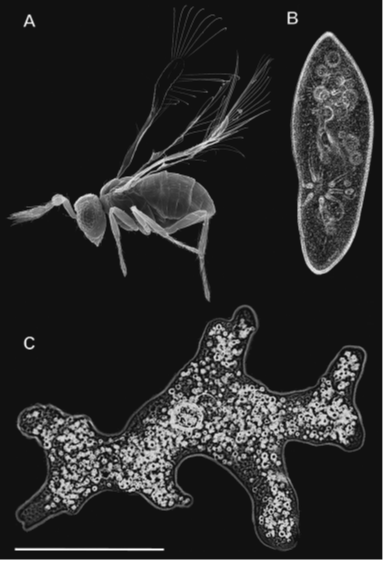 Above is an adult wasp (A), to scale with single-celled organisms – Paramecium (B) and an Amoeba (C). The white bar at the bottom represents 200 micrometers (1/5 of a millimeter).

These wasps are not single-celled organisms though, and their brains alone contain 4600 neurons. For reference, the brain of a honeybee contains ~1 million neurons. Despite their extremely small heads (again, look at that head next to the SINGLE CELLED amoeba) the wasps can still fly, seek out mates, and find thrip eggs to parasitize. So…what? How?

As mentioned above, neurons have a high threshold for what they consider important enough to maintain. This already leaves little that could be trimmed for the kind of space this wasp needs. Reclaim too much and the cell may lose its ability to send rapid signals, which is necessary for the wasp to survive and reproduce. The lifespan of these wasps is only 5 days, however, which means the cells only need to function for a relatively short period and could afford some losses to their long-term efficacy.

Inside our cells, insect cells, and many other organisms’ cells there is a structure called the nucleus. The nucleus contains and protects DNA, the information the cell needs to create all its components, then maintain or replace them. In fact, there is a nucleus visible in the amoeba above – the thick white circle near the center of the amoeba, the one roughly half the size of the wasp’s head. Without DNA a cell couldn’t maintain itself for very long, no longer ‘knowing’ how to make or replace the components that degrade over time. It sounds pretty important, maybe even necessary for survival, but…what if it wasn’t? What if an organism didn’t live long enough for maintenance to matter? No nucleus or DNA frees up half of a neuron’s volume, allowing for double the number of cells in the same space, and it turns out that evolution came up with the same solution.

During its metamorphosis into adulthood, M. mymaripenne’s brain cells get rid of their own nucleus and all its stored maintenance information. The neurons already exist, so maintenance is the only task the requiring DNA, and they don’t live long enough for that to matter at this point. This leaves them capable of complex behaviours while at an extraordinarily small size. Such is the frugal hunger of neurons that even the cell’s DNA (and thus its future survival) may be deemed unnecessary. Considering the alternative, perhaps our own brain’s fickleness when it comes to memories is, in its own way, still generous. 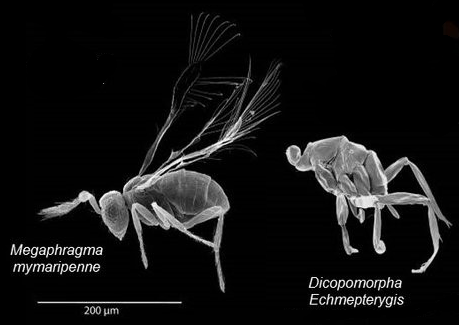 These poor, wretched creatures are left wingless and nearly headless by evolution, yet still survive into adulthood long enough to mate, seeming to exist as a testament to what biology is truly capable of. I have no meaningful thoughts or lessons about neuroscience to impart through D. echmepterygis, but I needed to share the burden of knowing they exist and are out there, waiting.