The butt-waving of the Japanese honeybee, and the dark promise contained within

Recently the Asian giant hornet (Vespa mandarinia) has been in the news due to some recent sightings in North America. They are also known to some as ‘murder hornets’, which is a bit much and presumes an answer as to whether hornets can even commit murder in a legal sense (manslaughter hornets perhaps?). While they are truly giant at nearly two inches long, they pose little direct threat to humans. The greater danger is that they could wipe out local bee populations-but to understand why that’s such a risk, we need to talk about Japanese honeybees (Apis cerana japonica). These are one of the hornets’ native prey, around 1/40 the mass of their behemoth predators, and a whole hive can easily be taken by just a small squad of hornets. However, evolution has equipped these bees with a unique and devastating defense.

The hornets, confident in their dominance, only send out individuals to scout for food and return to notify their nest. If a scout locates a hive, the bees must act quickly to prevent the greater hornet armada from becoming aware and reaching them. When the scout enters, it’s quickly surrounded by hundreds of bees in a ‘bee ball’. The bees don’t sting, that would be costly to the hive as each bee can only sting once before dying and many would be needed against the hornet. Instead, the bees rapidly beat their wings, and just like our muscles when we exercise, the flight muscle’s activity quickly produces heat and carbon dioxide in the body of an individual bee. 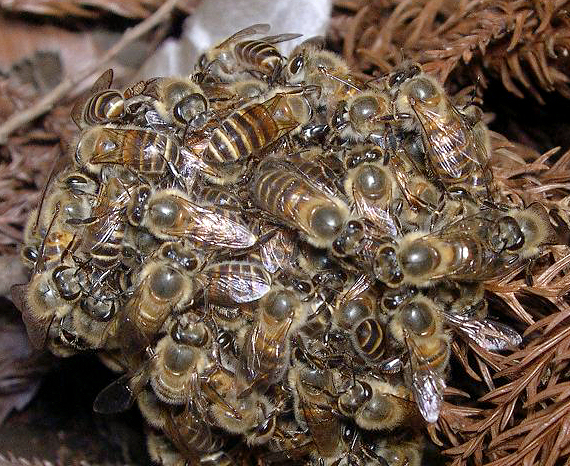 A single bee won’t generate much heat, no matter how earnestly it beats its wings. We’re talking about a whole ball of bees working together though, and their combined wingbeats work together to direct this heat towards the center. This heats the trapped hornet to 45.9 °C, dangerously sweaty for the hornet even in ideal circumstances. Further still, the carbon dioxide lowers the hornets’ heat tolerance, making a truly lethal combination for the entombed predator. The bees in turn have evolved to survive temperatures a few degrees above the hornet’s limit and developed keen heat-sensing neurons that allow fine tuning of the temperature to where it’s safe for them, but fatal for their quarry. The hornet’s slow-cooking death throes will usually take a few bees to insect Valhalla along with it (this is still a giant hornet, after all), but it ultimately succumbs. This means it cannot inform its compatriots about the hive, saving the bees from near-guaranteed destruction.

This all matters because, well, Western honeybees (Apis mellifera), the main honeybee species in North America, don’t do any of this. Due to their efficacy at producing honey, there have been attempts to bring Western honeybees to Japan, but it has always ended in failure as these bees only prove more efficient at feeding Asian giant hornets. Were this hornet to gain a real presence in North America, it could spell the end for its already fragile bee ecosystem.

Tell me about the butt-waving!

On some instinctual level the hornets seem aware of the terrible fate awaiting them in hives. Japanese honeybees can display an ‘I see you’ signal to a hornet when aware of it, and a hornet seeing this will move on to any reduced risk of being pressure cooked. When I first heard this, I assumed the bees signaled by presenting the still-smoking corpse of an earlier trespasser. Completely counter to my expectations, the bees signal their willingness to do this grim work by, well, waving their abdomens, (their most posterior body region) at the colossal predator.

…I’ll see myself out.